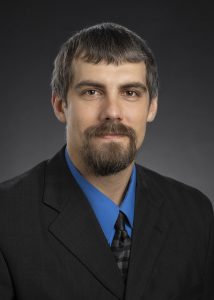 Frank Wolz brings an exceptional level of service to his role as a workstation engineer in CaTS. He has helped the university modernize its technology and pave the way for more technological growth in the future.

His coworkers and colleagues praise him for his friendly personality and strong work ethic and commend his hard work in every area of his career.

In 2020, Wolz led a campus-wide project to transition from a managed print contract with Xerox to a new centralized contract with ComDoc. Wolz oversaw the effort to replace more than 350 printers at the Dayton Campus and Lake Campus. The project has allowed a recovered cost of approximately $100,000 a year and has greatly improved Wright State’s service to customers.

Debbie Whisler, manager of classroom and computer lab technology support, commended Wolz’s efforts, saying that the magnitude of the printer-replacement project showed the width of his service skills.

“This project was a great example of Frank’s ability to effectively collaborate with many different departments and colleges to maintain and improve printing services at Wright State,” Whisler said.

“Frank stepped up, pitched in and worked with our team without fanfare or complaints,” Whisler said. “He simply went above and beyond for the sake of his fellow staff and the success of our faculty and students.”

Before joining CaTS, Wolz worked for Wright State University Libraries as a systems administrator and was responsible for ensuring that all printers, scanners and computers were working at peak level.

Whisler said that Wolz is well-liked and his demeanor makes him incredibly agreeable to work with.

“He is a favorite to all,” she said. “He goes out of his way to assist others. He takes on any duties assigned to him and often acts independently to solve problems and create better processes.”