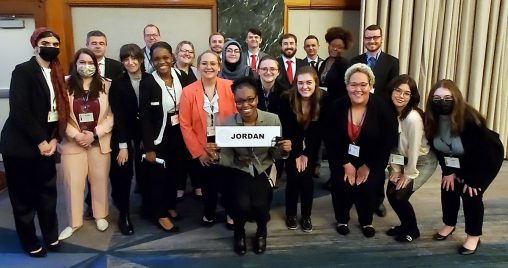 Representing Jordan, the Wright State Model United Nations team was named an Outstanding Delegation at the national conference in New York on April 3–7.

After a two-year hiatus caused by the pandemic, the Wright State University Model United Nations team returned to New York City and earned the top honor at the intercollegiate National Model U.N. Conference.

Wright State Model U.N. team was named an Outstanding Delegation at the national conference, which attracted nearly 150 colleges and universities from around the world on April 3–7.

During the Model U.N. conference, each participating university is assigned a country to represent. Students participate as delegates to various U.N. committees, researching and formulating political positions based on the actual policies of the countries they represent.

This is the 42nd consecutive year in which Wright State’s Model U.N. program received a team delegation award when it has been able to participate in the national conference.

The team of 20 students was able to travel to New York for the 2022 conference, though the semester has still had its challenges.

A snowstorm in February forced the cancelation of the annual Dayton Model United Nations Conference, which helps the team prepare for the national conference. Then during the National Model U.N. Conference, Wright State’s briefing with the Jordan Mission to the United Nations was canceled by COVID.

The team also was led by one head delegate instead of the usual two and included 17 team students who had never been to New York before.

Yet, the team overcame these challenges to secure the top award of Outstanding Delegation at the National Model U.N. Conference, Shannon said.

“Dr. Anderson and I couldn’t be prouder of our persistent and intrepid students and tireless champion Head Delegate Brad Kerry,” Shannon said. “This year validated that our program’s fundamentals are sound and that the people matter to pull off great things year after year. This was a team win and they should be proud.”

Founded in 1970, Wright State’s Model United Nations program is open to students from all majors. Interested students interview in the fall and participate in a three-credit-hour political science class during Spring Semester.

Students learn the skills of teamwork, problem-solving, diplomacy, public speaking, technical writing and researching. They also learn how to implement a different country’s national and foreign policy, how to dress, how to act in committee and what to expect from other countries.