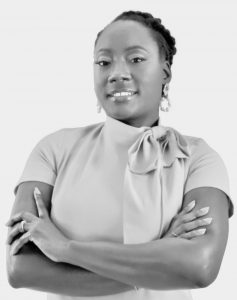 Wright State University alumna Nina Carter has been honored by the University of Dayton for her work — past, present and future — in public administration.

Carter, senior vice president for place-based strategies of Learn to Earn Dayton, was a guest lecturer at a March 10 event hosted by the Pi Alpha Alpha chapter at UD. Pi Alpha Alpha is a national honor society for individuals who have degrees or backgrounds in public administration.

“They awarded me with an honorary membership to their chapter of Pi Alpha Alpha,” Carter said. “It was a great gesture from UD’s Department of Political Science.”

Carter earned two degrees from Wright State. In 2004, she received a bachelor’s degree in mass communication with a minor in African and African American studies and a national certification in nonprofit management and leadership. In 2006, she received a Master of Public Administration. She also is a member of Wright State’s Pi Alpha Alpha chapter.

Learn to Earn Dayton is an educational nonprofit organization.

“Our work is heavily focused on the cradle to career continuum,” Carter said, “ensuring that all Montgomery County children have success from birth until they graduate from college or earn a high-quality credential. We bring together educators, business leaders, government officials and community stakeholders to focus our efforts collectively and strategically on that mission. We’re working together to make Montgomery County a place where all children are successful.”

She added, “My background has been in youth, family and community development. I left the area for eight years in 2013 but continued to serve communities and returned this past summer, joining the Learn to Earn Dayton leadership team in July.”

Carter is part of a new Learn to Earn initiative called the Northwest Dayton Partnership.

“It’s a cross-sector collaboration led by a steering committee of people who live or work in northwest Dayton. They’ll develop a six-to-10-year strategy that will focus on shifting power and ownership to deeply connected and Black-led community organizations, building high-quality childhood and K-12 education systems and supporting community racial and economic equity work,” she said.

She said that while Wright State’s campus is in Fairborn, “Wright State tries its best to extend its arms to place some of its classes and resources in the community. I hope Wright State makes its way to the northwest part of Dayton in the future.”

She said, “I’ve always been deeply connected with community engagement work. It really means a lot to me considering my childhood as a young, poor, African American in the city of Dayton who did have access to opportunities as a student.”

“Those who completed the program received a full scholarship to Wright State. I spent every summer there starting in middle school through high school, ,” she said. “If not for Wright STEPP, I would not have been able to obtain an undergraduate degree or be in the position I am in now. I’m thankful that it helped me grow, first as a student leader and now as a community leader.”

“During my time at Wright State, I learned a lot about community engagement and the importance of the work being less about me and more about the power of a community’s voice and finding equitable ways to ensure that voice is heard and acted upon,” she said. “Wright State changed the trajectory of my life in a deeply positive way, and for that, I am eternally grateful.”