Sharing the joy of music 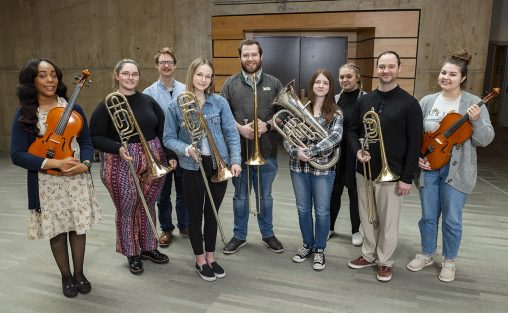 Wright State School of Music students with instruments from the collection of the late professor Mel Goldfinger.

Mel Goldfinger, Ph.D., always loved music. From playing the trombone as a kid to sharing his talent as a member of the Wright State University Symphony Orchestra, music was always an integral part of Goldfinger’s life.

“He had an incredible aptitude for music. He adored it,” said Adrian Corbett, Ph.D., Goldfinger’s wife and an associate professor of neuroscience, cell biology and physiology at Wright State.

Throughout their marriage, Corbett witnessed firsthand Goldfinger’s uncanny ability to learn how to play any instrument that he picked up. While the trombone was his first great love, Goldfinger would also go on to play the baritone horn or euphonium, viola, violin, piano, guitar and banjo.

“He could sight read music and be almost perfect,” Corbett recalled.

While Goldfinger’s aptitude and passion for music earned him a spot in New Jersey’s state band and the opportunity to perform in the Rose Bowl parade with Rutgers University, he did not pursue a career in music. Goldfinger became an accomplished neuroscientist and taught at Wright State for more than 30 years.

As Goldfinger built a successful career on his scientific acumen, he still managed to fulfill his passion for music. He practiced nightly on his extensive collection of musical instruments, performed with the Miami Valley Symphony Orchestra, and played the viola and trombone in the Wright State University Symphony Orchestra.

“Everyone from the orchestra loved him. He was a very talented musician,” said In-Hong Cha, D.M.A. professor of music and conductor of the University Symphony Orchestra.

Goldfinger’s love of music was palpable, and his deep devotion to the field now lives on for current and future generations of Wright State students. After Goldfinger’s passing in September 2021, Corbett donated most of his instruments to the Wright State School of Music.

“Mel wanted the students to benefit,” she said. “He knew that a lot of people didn’t have the wherewithal to afford instruments, particularly students. He wanted to make sure that, when he died, his instruments would go to someone who could really use them.”

As chair of the School of Music, Dan Zehringer, D.M.A., is ensuring that Goldfinger’s beloved collection is being put to good use.

“These instruments are of very high quality,” said Zehringer. “We will use them in our main inventory for students who are participating in our concert bands and orchestras.”

Goldfinger left several string instruments to the university along with alto, tenor and bass trombones and two baritone horns, also known as euphoniums. All of the instruments arrived on campus in high-quality, leather cases.

“There are a large number of very fine violas and a few violins that we will be able to use to allow our better students — who maybe don’t have as high a quality of instrument — to play on while they’re here,” said Zehringer. 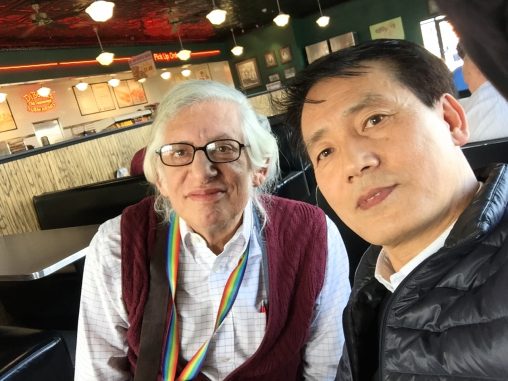 Some of Goldfinger’s instruments will serve as valuable teaching tools in methods classes, where music education majors are taught how to play string instruments.

As a lover of classical music, Goldfinger had boxes and boxes of sheet music. Corbett gathered the scores by Beethoven, Bach and Shubert — along with their accompanying CDs — for the School of Music. Music stands were also donated, in addition to pedagogical materials that will be helpful for future music educators.

“It’s a great gift for investing in the future of the School of Music and for providing a special perk for those students who may not have a high-quality instrument of their own,” said Zehringer. “We are just very grateful that Mel chose the School of Music to be the recipient of these gifts. We will definitely take care good of them and put them to good use for years to come.”

For Corbett, the gift to the School of Music is the perfect tribute to her husband’s lifelong love of music and his compassion for others.

“Mel was one of the last true altruists,” she said. “He cared so much about everyone else. That was the philosophy behind his whole life.”