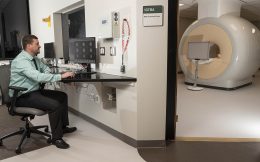 Matthew Sherwood, Ph.D., director of Wright State’s Center of Neuroimaging and Neuro-Evaluation of Cognitive Technologies, says the MRI scanner promises to lead to new collaboration between Wright State, the Air Force and researchers at Wright-Patterson Air Force Base.

The area’s only magnetic resonance imaging (MRI) scanner dedicated exclusively to research is operational and may prompt growth at a Greene county college.

Wright State University plans to use the 3 Tesla MRI scanner for human research studies in neuroscience. The university has high hopes for its potential.

“I just think this is something that is really needed in Dayton to help boost regional research and development infrastructure,” said Matthew Sherwood, director of Wright State’s Center of Neuroimaging and Neuro-Evalutaion of Cognitive Technologies.

Sherwood said the MRI will help him in his research on hypoxia, a condition in which the brain is deprived of adequate oxygen. It often occurs in high altitudes or in underwater diving and can result in vertigo and tunnel vision and even subpar performance for the following 24 hours.

Sherwood, who has led nearly $3.5 million in projects funded by the Department of Defense while at Wright State, also sees an opportunity to expand the collaboration with the Air Force and researchers at Wright-Patterson Air Force Base in using the scanner.

“We’re hoping they’re able to bring some of their research here,” he said. “We are committed to partnering with them.”

The grant application for the scanner was written by Sherwood and Assaf Harel, an associate professor of psychology and a cognitive neuroscientist. 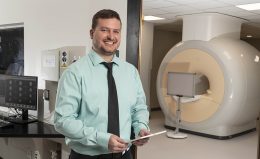 Sherwood also is interested in accelerating and improving learning, which would help the military by shortening training and making it more effective.

An MRI uses strong magnetic fields and radio waves to create detailed images of the organs and tissues within the body. It is considered the gold standard for neuroscience research, as it can provide a highly detailed picture of the brain and its activity in real-time.

Wright State has other specialized equipment that can be used with the MRI scanner to study the human brain, such as a projection system that can be placed inside the scanner that flashes images or stimuli and then records the responses of the subjects, Sherwood said.