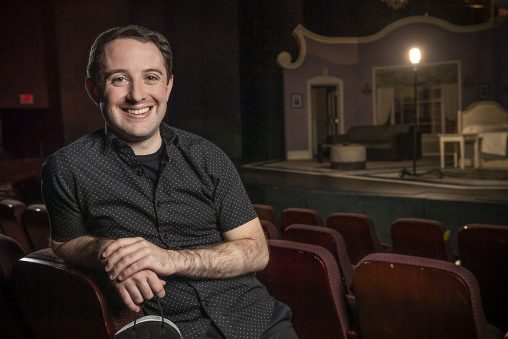 In the opening scene of the longstanding, beloved Broadway musical Wicked, the character Glinda floats in on a giant bubble and says, “It’s good to see me, isn’t it?”

On the night of September 14, 2021, that iconic line took on a whole new meaning as Wicked resumed performances on Broadway after an 18-month hiatus due to the COVID-19 pandemic. Naomi Reisner ’18, who works as a hairdresser on Wicked, was backstage for the historic moment.

“I don’t think the crowd stopped cheering for about five minutes,” Reisner recalled. “People were just absolutely ecstatic to be back. They were crying and just loving the show.”

For Wright State University alumni working in the Broadway community, the return of audiences to New York City’s theatres was more than just a welcome sight. It was the much-needed light at the end of a long, dark tunnel of pandemic despair. As the house lights went down and the curtain rose, life seemed normal again, if only for a few brief hours.

Broadway was back. The show goes on. 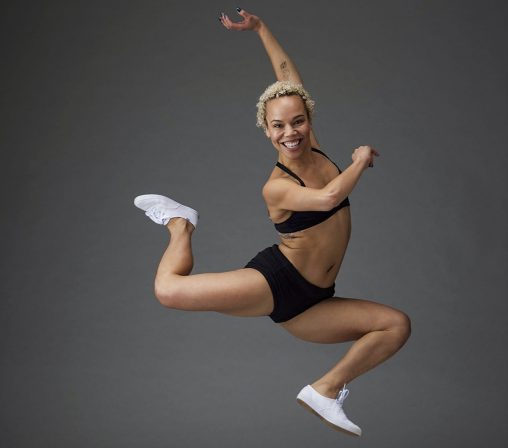 When the world shut down

In March 2020, Alexis “Tilly” Evans-Krueger ’14 was about to make her Broadway debut. As a vacation swing in Moulin Rouge, she was scheduled to fill in as one of the dancers in the ensemble—until the spread of the coronavirus shuttered theatres and launched lockdowns around the globe.

“I was so excited. It was my first Broadway contract,” she said. “All of sudden, our jobs were gone.”

As if facing immediate unemployment wasn’t frightening enough, New York City quickly became the epicenter of the pandemic in the United States.

“I don’t think anybody will ever be able to truly understand what it’s like to hear the sirens that we heard so regularly in New York in those first couple of months,” said Tony Award-winning producer Joey Monda ’12.

Like Monda, Cameron Holsinger ’04 has remained in New York throughout the pandemic.

“In the beginning, we didn’t know what was happening,” said Holsinger, who is the stage manager for Hamilton. Like many others working in the Broadway community, Holsinger was initially told the theatres would only be closed for two weeks.

As weeks turned into months, it became clear to Holsinger and his fellow Wright State alumni that Broadway was not coming back any time soon.

KJ Hippensteel ’06 was in rehearsals for the new musical Mrs. Doubtfire—for which Monda serves as one of the producers—when he received the news on March 12, 2020, that Broadway would be shutting down.

Not wanting to be cooped up in an apartment with two young children, Hippensteel and his wife rented a van and drove through the night to his father-in-law’s home in Cleveland.

“We ended up being in Cleveland for a year-and-a-half with our kids,” he said. “We were lucky to have my father-in-law’s place to go to.” 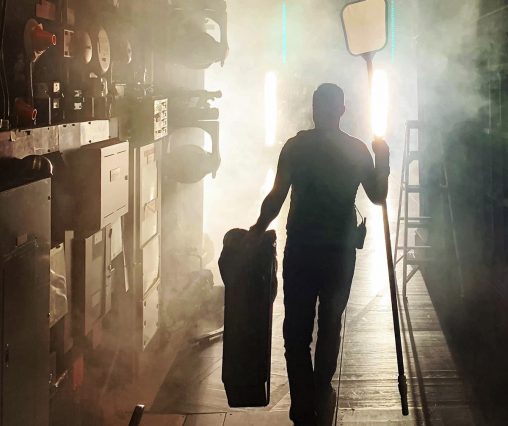 Reisner also headed to Ohio, where she spent three months with her family in Dayton. Meanwhile, Ross Feilhauer ’03 headed south to Florida when his work as part of the lighting and special effects crew for Harry Potter and the Cursed Child came to a halt.

Regardless of where they settled geographically, each of them needed to come up with a plan. With live theatre performances on hold indefinitely, where would they find work? How would they feed their passions for creating and performing when the whole world was at a standstill?

As a producer, Monda is used to working on projects for the long haul. It takes countless hours of conversations and years of development before a production makes its way onto a Broadway stage. During the COVID-19 pandemic, Monda was able to hunker down and weather the storm better than most of his colleagues.

“I stayed tremendously busy, working throughout it all,” said Monda. “My own community and support network kept me going. I know there were a lot of people, though, who did not have the same support and same abilities. That’s a luxury and a privilege that’s not lost on me.”

Monda knew many people in the arts and culture sector who had to rely on skills they otherwise had not monetized before.

“All of a sudden, performers were teaching Zoom classes and doing more voiceover work,” he said. “I think everybody in our industry had to learn how to pivot.”

While she would normally be helping cast members get in and out of their wigs during a performance, Reisner found another way to work in her craft. When the barber shops reopened, she returned to New York City to cut hair.

“When I got back to New York, business was not good. Nobody really wanted to come out and get a haircut,” said Reisner, who earned her cosmetology license at age 17. “People were afraid to do anything. The city was really empty.”

When she wasn’t cutting hair, Reisner relied on other mediums, like drawing or painting, to stay creative. She also collaborated with some of her peers on hair and makeup photo shoots.

“The one advantage to the pandemic,” she said, “was time.”

Hippensteel relished the quality time with his family and playing with his two boys in the big backyard of his father-in-law’s home in Ohio.

“It was kind of an amazing year for us and our kids,” said Hippensteel, who built a studio in his father-in-law’s basement where he and his wife, Brooke Jacob, would teach online theatre classes for kids. 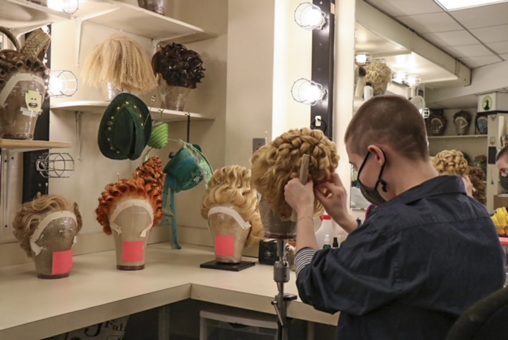 ​Naomi Reisner ’18 keeps the wigs of “Wicked” in tip-top shape.

“It was kind of a godsend,” Hippensteel said of his wife’s business, Scamper Theatre Kids. “Because we’re storytellers, theatre people connect to the kids in a way that a lot of other teachers via Zoom weren’t able to. The whole goal of the classes is to keep kids’ imaginations running wild. Our hope is that they will continue that throughout their lives.”

For Evans-Krueger, the pandemic provided the rare opportunity to embark on a backpacking trip with a friend during the summer of 2020.

“It was incredible, such a life-changing experience,” Evans-Krueger said of her journey through the American West. “Had I not had this chance, I don’t know if I would ever take five weeks off. We don’t ever get that.”

While Evans-Krueger was initially hesitant to join the world of online Zoom classes, she began collaborating with Dance Lab New York as a teacher and choreographer in October 2020.

“I was overjoyed to be dancing again,” she said. “It had been so long.”

Volunteering at the J.N. “Ding” Darling National Wildlife Refuge on Sanibel Island proved to be one of the silver linings of the pandemic for Feilhauer. Along with helping to create educational videos, he purchased a 3D printer for the wildlife refuge. This gave him the opportunity to hone his skills on the technology, while providing a much-needed tool for volunteer projects.

“For me, the pandemic was a breath,” said Feilhauer. “It was nice to see another side of the world, outside of theatre, and bring my knowledge to other people. I hope that I helped as much as I could.”

Two weeks before previews for Mrs. Doubtfire resumed, Hippensteel and the rest of the cast sang at a press event at Bryant Park.

“It was pretty emotional,” he recalled. “Seeing that many people there, excited for theatre—all of us were trying to sing, but crying. Live theatre is one of those things that feels like it was taken from us for a year and a half. For a lot of us, that’s part of our identity. It’s part of who we are.”

For Evans-Krueger, the return of Moulin Rouge was a night she will never forget. “I’ve never seen that energy before,” she said. “It was unmatched. The audience was just so excited to be back in the theatre. Everything in Moulin Rouge—the words, the script—just hit so much harder than it ever had before.”

In the age of COVID, putting a show on every night is no easy feat. The strictest health and safety protocols must be followed. Masks are worn at rehearsals and everywhere backstage. Performers don masks as soon as they exit the stage. COVID testing is done two or three times a week. Everyone—cast and crew—is required to be vaccinated. The audience must be masked and vaccinated as well.

For those in the Broadway community, COVID safety measures are a small price to pay to resume doing the work that they love.

“It’s a great community. That’s what I missed about it the most,” said Feilhauer. “We’re a family, all here to help each other.”

Holsinger’s time away from Hamilton gave him a new appreciation for the business.

“It’s easy to concentrate on the things that annoy you or the things that are difficult. But when it’s taken away—just like that—you realize that you weren’t paying attention to the right things before,” he explained. “For now, I’m enjoying my renewed interest in what I am doing and trying to do it as best as I can.” 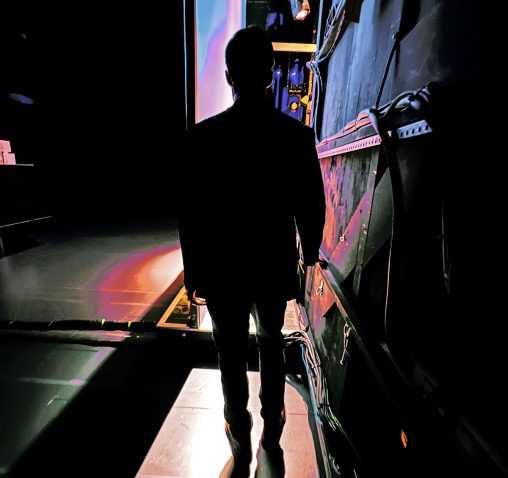 KJ Hippensteel ’06 waits in the wings as the understudy for the lead character of Daniel Hillard in “Mrs. Doubtfire.” (Photo Credit: Travis Waldschmidt)

Monda, meanwhile, is focused on bringing the world of Broadway to a much larger audience.

“We have to expand our Broadway shows and our passion for theatre and the arts beyond the people in the four walls of our theatre,” he said. “There is a huge audience out there that is physically, geographically, or economically prohibited from ever seeing our work.”

Monda’s production company previously brought Allegiance, Bandstand, and Kinky Boots from the stage to the screen. From Hamilton on Disney+ to Come From Away on Apple TV+, Monda was pleased to see more Broadway productions come to life in people’s homes during the pandemic.

“I really hope that theatre and arts institutions remember that you can’t forget about all of the audiences you were engaging with during a COVID world. We have to continue to create content and get stories out to them,” said Monda, who capped off 2021 with his second Tony Award, when The Inheritance was honored as Best Play.

In the meantime, Monda will continue to work on filling the seats on Broadway.

“It’s going to take some time,” he said, “but Broadway will be back, stronger than ever.”