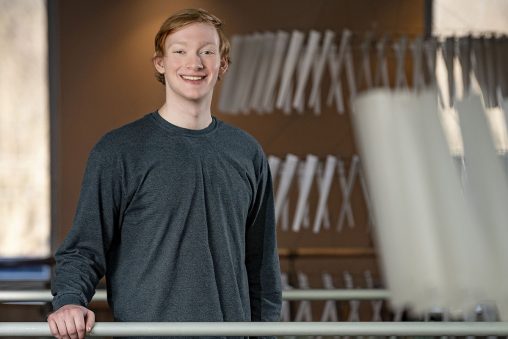 Political science major Austin Leist wants to make a career out of having civil arguments as a lawyer and possibly a prosecuting attorney. (Photo by Erin Pence)

Austin Leist wants to make a career out of having civil arguments. A first-year student at Wright State, he plans to become a lawyer, possibly a prosecuting attorney someday.

Leist is fascinated by government and the process of law, but he is also drawn to the idea of being able to argue for a living.

“I love the conversation and the arguments,” he said. “I want to be able to have a civilized argument and conversation. In this case, it will be my job to argue.”

Valedictorian of his 2021 graduation class at Greenon High School, Leist was offered scholarships from multiple universities. He chose Wright State because, in addition to a full-ride scholarship, he liked the university’s political science program.

“I looked into a lot of political science programs and Wright State had one of the better ones,” Leist said. “The program was better and had more resources and opportunities available. With a full ride and a good program, it was a pretty easy choice.”

Leist had worked with then-Clark County Prosecutor Andy Wilson. He is still in contact with Wilson and said he would love to work for the county someday. Additionally, Leist’s stepsister works with a law firm and Leist said he would be happy to intern with her.

While he would like to attend law school and practice locally, Leist is open to going elsewhere if he is able to land a scholarship to a law school farther away.

In high school, Leist was incredibly busy. He played sports during his first two years of high school and took college-level classes at Wright State, Sinclair College, and Clark State College. In addition to being valedictorian, he was class president and took advanced math classes. He also tutored students who struggled with math, glad to help anyone who came to learn, whether they were excited about the schoolwork or not.

Leist said his family has been wonderfully supportive through his high school career, and they continue to support him as he attends Wright State. He lives at home in Enon. In his free time, he likes to play all types of video games with his friends, both as a break from schoolwork and to keep his mind fresh.

Leist believes everyone can succeed by working hard and doing their best at whatever they do. “Just keep at it, no matter how you think you’ll do,” he advised. “You’ll do better than you think.”