After years of hard work, Reginald Gibson finally marched in a graduation ceremony as a member of the class of 2022 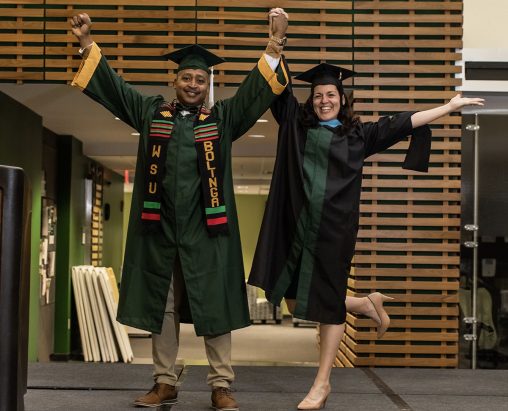 Witnessed by family, peers and faculty, Reginald Gibson finally marched in a graduation ceremony when he received his bachelor’s degree in liberal studies during Wright State University’s April 30 commencement ceremony.

The fourth time proved to be the charm for the 52-year-old Gibson as participating in a graduation ceremony had eluded him three times previous. While enduring a multitude of trials and tribulations, this culmination of his diligence and dedication may prove to be only the genesis of what’s to come.

And in a special twist, Gibson’s wife of nine years, Kelly Gibson, graduated from Wright State the day before with a master’s degree in leadership development.

“The fact that we graduated together is amazing,” Reginald Gibson said. “Although it took a lot of hard work and sacrifice, we didn’t want to lose a chance to inspire our children.”

The couple has a 16-year-old son and 8-year-old triplets.

Prior to graduation, Gibson received the 2022 Bolinga Excellence in Service and Teaching Living Testimony Award.

But his journey began several decades ago. As a teen, he changed high schools and due to a snafu in the transfer process, was shy a few credits when graduation time neared.

Even though he went to work before school, attended a full day of classes, went back to work after attending class, and then went to school in the evenings in an attempt to meet graduation requirements, his earned credit wasn’t acknowledged in time to walk with his graduating peers.

“I was working at McDonald’s the night my class graduated,” he said.

While struggling to support a young family, obtaining a high school diploma became a distant afterthought. But years later Gibson decided to obtain his GED. After a few failed attempts, he passed the exam but pride and the stigma attached to receiving a GED in lieu of a diploma served as roadblocks to his participating in a public ceremony.

A few years later, Gibson enrolled at Sinclair Community College. Although he had not been a student for decades, he credits the neuroplasticity of the brain with helping him adapt to college life. But with family, work and other pursuits, it took him more than a decade to complete his associate degree. And when it came time for him to march down the aisle to receive his diploma, COVID-19 put the kibosh on the ceremony.

To say he was snake-bitten would be an understatement. Not to say that he isn’t accomplished. In the interim, Gibson established two businesses, wrote two books, worked as an HVAC technician and traveled as a motivational speaker. He met Kelly when they were coworkers at the same company.

“We are the last people you’d ever think who would be together,” she said. “We are polar opposites of each other.”

But Kelly is also the yin to Reginald’s yang and together they act as whirling dervishes.

Kelly Gibson is a nationally certified health coach and fitness professional, founded and runs a company that promotes physical and emotional well-being, and has written a book available on Amazon.

“You and the children are my life,” Reginald told Kelly while discussing his family during a recent conversation in the Student Union. 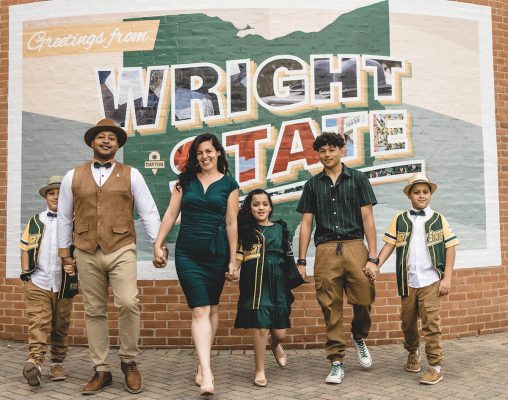 Reginald and Kelly Gibson with their children, from left, Gabriel, Adalynn, Timothy and Christian.

But there have been some pitfalls and stumbling blocks along the way. A short time following the birth of the triplets, Reginald suffered a heart attack that sent shockwaves through the family.

“I always thought of him as Superman,” said Kelly. “He’s always been there for me.”

Reginald recovered fully, but a few short years later the couple lost their jobs when their employer unforeseeably shuttered its doors.

On a whim five years ago, Kelly reached out to the producers of the “Ellen DeGeneres Show” with their story and as luck would have it, the family was invited on as guests. They received $10,000 and a new car to supplant the tattered vehicle that served as their main mode of transportation.

“I’d had a premonition that one day we’d have a new car with no car payments,” Reginald said.

Ultimately, the pair wishes to pursue doctoral degrees, and in the meantime, Kelly plans on growing her business while Reginald plays “catch up” and obtains his master’s degree on his way from GED to Ph.D.

Reginald is focused on uplifting underprivileged or challenged African American men and youth while Kelly wishes to continue empowering women and children by helping them realize their worth.

“Reginald Gibson is a student who always puts a smile on my face,” said Sarah McGinley, interim academic director of developmental writing in the Department of English Language and Literatures.

“In part, it’s his always upbeat nature, his patience and kindness, but also his careful insights in his writing and his thoughtful comments on the discussion board. It was quite refreshing,” McGinley said. “He’s a great example of how personality and enthusiasm can come through even in an asynchronous online class.”