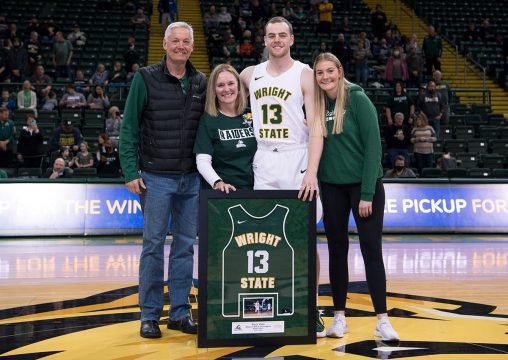 Among those on Wright State University men’s basketball team who enjoyed winning their way into the NCAA tournament was 6-foot 6-inch, 225-pound forward Riley Voss. What sets him apart from his teammates, though, is that he already has a bachelor’s degree from a rather selective university and is close to a slam dunk on getting a master’s degree from Wright State.

As for the future, he looks to continue his love of the sport not on the court but on the internet.

A native of Cincinnati, Voss went to Moeller High School, a perennial Ohio scholastic sports powerhouse. Despite the sports options, Voss said, “I exclusively played basketball pretty much since seventh or eighth grade.”

He was recruited by Cornell University. “I fell in love with the campus. I liked the coaching staff a lot. It seemed like a no-brainer to go there for the academics and to continue playing basketball.”

Go there he did, and in four years he earned a bachelor’s degree in economics with a minor in business. His team made the Ivy League tournament in his first year, played to roughly a .500 record the other two years, and didn’t play at all in his senior year because the Ivy League suspended sports during the pandemic.

“I didn’t know what was going to happen with my life in my senior year,” Voss said. “I thought maybe I’d coach or get a graduate assistantship, but I wanted to keep playing. Then I got an opportunity to play for Wright State.”

Voss said he and Wright State connected through a still-close association with his high school coaches and with a former teammate. Wright State’s highly regarded Master of Business Administration Program also appealed to Voss.

“Coach [Scott] Nagy called, and I said, ‘Let’s do this,’” Voss said of the conversation that brought him on board Wright State and the team. 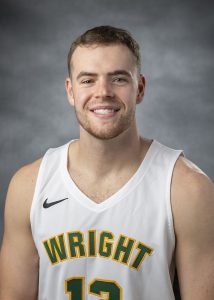 Voss began at Wright State in the summer of 2021. He’s on track to graduate this summer.

“I’m finishing the program in a year,” he said. “I love basketball, but I’ve put a lot of work into academics.”

And so he has. “Riley is a very hard-working student who does a wonderful job of balancing the challenges of playing Division I sports with sustained excellence in the classroom,” said Marlena Akhbari, Ph.D., associate professor of finance and financial services in the Raj Soin College of Business.

What will he do after he receives his MBA? “I’m not 100 percent sure. The last couple of months have been crazy with basketball,” Voss said. “I’ll start a job search soon.”

Asked what would be his dream job, he said without hesitation, “I’d like to work with NBA Top Shot.”

NBA Top Shot is a web-based company that partners with the National Basketball Association to provide digital collectibles — video clips of players and game action limited in number to ensure rarity.

“There’s a value associated with this rarity,” he said. “The benefit is that a person can own a piece of media.”

As with other sports collectibles, fans can buy and trade the videos. It’s a blend of his economics and business degrees with his love of the sport.

Thinking back to the success the Raiders enjoyed in the Horizon League tournament and in the NCAA First Four, then playing in the first round of the NCAA Tournament, Voss said, “I’m going to remember that experience for the rest of my life. It was special for our fans and our university.”