The Wright State baseball program earned a trip to the 2022 NCAA tournament with its 24–0 win over Oakland in the Horizon League Championship.

The Wright State baseball program defeated No. 2 seed Oakland 24–0 to clinch its second-consecutive Horizon League Championship on May 28 at Nischwitz Stadium.

The Raiders (30-25, 20-9 in the Horizon League) area headed to the Blacksburg Regional as the No. 4 seed from June 3-6. The Raiders learned their postseason site Monday afternoon as part of ESPN’s live Selection Show.

Wright State will take on No. 1 seed Virginia Tech on Friday, June 3, at 7 p.m. ET in their opening game of the regional. Joining Wright State and Virginia Tech in the four-team regional bracket is No. 2 seed Gonzaga and No. 3 seed Columbia.

Sammy Sass shined at the plate as he batted 3-for-5 with three home runs and nine RBI in the win. The nine RBI tied the tournament record last set by Zane Harris in Friday’s semifinal victory. The total tied for the eighth-most by an individual in an NCAA Division I game this season.

Sayre went 3-for-5 at the plate with a double, two RBI, and three runs, while Julian Greenwell, Anglin and Patrick had two hits apiece. All nine starters tallied a hit, including eight players driving in at least one run.

Starting pitcher Alex Theis (6-1) received the winning decision after holding Oakland (31-27, 18-11 HL) to no runs on just one hit and eight walks while striking out seven batters in 5.1 innings. The left-hander had a no-hitter through five innings but gave up a single in the top of the sixth. Tristan Haught, Luikart and Aaron Ernst tossed scoreless outings in relief to seal Wright State’s sixth shutout of the year.

Sass was responsible for Wright State’s first seven runs, as he belted a two-out grand slam in the opening inning, followed by a three-run homer in the bottom of the third. 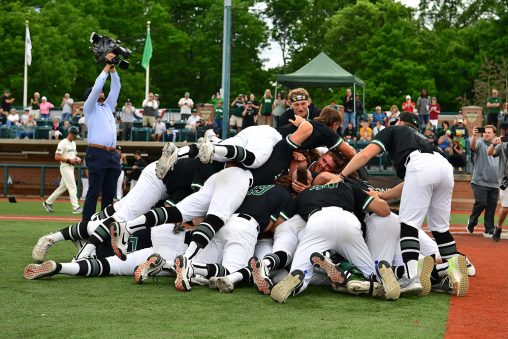 Patrick connected on a solo roundtrip in the fourth inning, while Avery Fisher pushed the Raider edge to 9-0 with an RBI double in the bottom of the fifth.

In the sixth inning, Wright State put the title game out of reach with an eight-spot. Greenwell, Harris, Luikart and Patrick had RBI hits, while Fisher and Riemer plated a run apiece on sacrifice flies.

The Raiders extended their lead to 24-0 with seven runs on four hits, four free passes and an error in the bottom of the seventh inning. Sass drove in two runs on his third home run of the game in the scoring burst. Harris and Sayre both drilled two-run doubles.