Siblings Melissa, Jacob and Joshua Ward graduated together as members of Wright State’s spring class of 2022 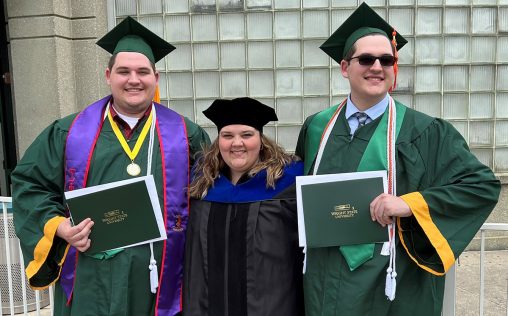 Wright State’s spring commencement ceremonies were three times as special for the Ward family, who celebrated the graduation of siblings Jacob, left, Melissa and Joshua.

The number three figures prominently in fairytales, folklore, pop culture and even sports.

You have three: musketeers, blind mice, little pigs and bears that antagonized Goldilocks. On television Fred MacMurray had three sons, three was company and shenanigans galore were perpetrated by Three Stooges. At the movies, there were three amigos and three men took care of a baby. And in the world of sports, horse racing has its Triple Crown and the Olympics awards gold, silver and bronze medals to its champions, to name a few.

Now add to that pantheon the three Ward graduates, who accepted their diplomas from Wright State University during the university’s commencement ceremonies on April 29 and 30.

The Wards say there was no sibling rivalry and that the three of them graduating together was not done by design.

“It was mostly by chance,” Melissa Ward said of the tri-graduation. “Joshua and Jacob both completed their bachelors in four years. My Ph.D. graduation was a bit more flexible so it ended up working out well. We are all happy to have graduated together and it was fun being able to share that moment. With our age difference, we didn’t think it would ever be possible.”

The gravitation of the trio toward technical disciplines could very well be a product of their upbringing. Their father is a marketing analyst for a prominent local company, and their mother cultivated their love of science by taking them to museums and stoking their creative interests.

“Our mom was a stay-at-home mom for 18 years and kept us busy with activities and classes growing up,” said Melissa. “She deserves a lot of credit for encouraging our interests and investing so much time and energy into our upbringing. In middle school and high school, we were all involved in Science Olympiad and marching/concert band so science has always been a part of our lives. It made sense for us to continue into STEM for college, and I think our specific disciplines reflect our personalities.”

Jacob Ward said his favorite memories of Wright State revolve around serving as an undergraduate teaching assistant for anatomy and physiology courses.

“I was able to help other undergraduate students find their way in the course and help them on a path that was similar to my path towards medical school,” said Jacob, who will attend the Ohio State University College of Medicine in the fall with the hope of becoming either a neurosurgeon or orthopedic surgeon in the future.

Joshua and Melissa collaborated on a project to measure chromatin edges in microscopy images. The project proved so successful that Melissa used it as her dissertation, which she successfully defended in April. 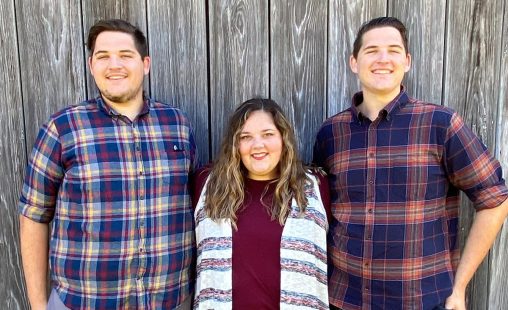 “Melissa brought the biological experience and I brought the coding aspect,” said Joshua, who will pursue a master’s degree at Wright State with the eventual goal of conducting research for the U.S. Air Force. “It was a great time working with my sister. The funniest part is she had no clue what I would be talking about when I began talking about coding, and vice versa when she would be talking about the biology. In the end, we made a working tool, and it was used directly for her dissertation.”

Paula Bubulya, Ph.D., professor and associate chair of the Department of Biological Sciences, described Melissa as an exemplary student, especially for her research as part of a project funded by a National Institutes of Health grant aimed at understanding the fundamental mechanisms and nuclear structures that regulate synthesis and processing of mRNA in our cells.

“Dr. Melissa Ward is a smart, talented and exceedingly creative research scientist,” Bubulya said. “She initiated collaboration with Jacob and Joshua, who assisted Melissa with some aspects of experimental design as well as data collection and analysis.”

Following graduation, Melissa will transition to the business side of the biotech industry through project management.

For the triumvirate, it’s been a satisfying journey.

“Personally, I think it’s awesome that all of us were able to graduate on the same weekend, and it was something that definitely made our parents proud,” said Jacob. “I don’t think there was much rivalry since we all had different degrees and course loads. Rather we were all supporting each other to make it to the finish line.”