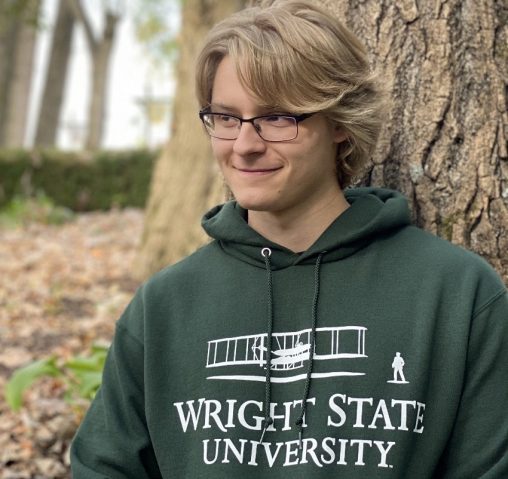 Ashton Williams earned his bachelor’s degree in computer science in 2022 and is now working on his master’s degree as part of a combined 4+1 degree program in the Wright State Department of Computer Science and Engineering.

Ashton Williams, a computer science graduate student in the Wright State University College of Engineering and Computer Science, said that he and his brother grew up with a love of technology.

“Our parents exposed us to technology when we were very young,” he said. “We were given our own Windows 98 computer when I was about 6 years old and our first video game consoles when we were even younger.”

As he got older, Williams got more and more involved with technology, building his own computers and disassembling pieces of technology to see how they worked. This, as well as the fact that his brother graduated from Wright State University with a bachelor’s degree in computer engineering, went a long way to inspiring his choice of major.

“After seeing what he did in school, I knew I wanted to go into a similar field,” said Williams, who received a bachelor’s degree in computer science in 2022 and is now working on his master’s degree as part of a combined 4+1 degree program.

From the moment that he started looking at universities, Williams said he knew he wanted to attend Wright State. His goal was not only to earn a degree that would offer him a bright future in his chosen field but one that would allow him to meet his goal of graduating debt free.

During his first year, he said he was wrestling with exactly which path he wanted to take. He began seeking a degree in mechanical engineering, but by the end of his first semester realized that he really wanted to do something with computers.

Even though programming was new to him, and he received his first B in his first computer science class, he said loved it and knew it was where he belonged.

“I was excited about what I was learning and wanted to keep improving,” he said.

His ambition grew and by his sophomore year Williams attended a career fair in hopes of gaining an internship that would give him more programming experience. He said that he briefly felt discouraged when he was told by employer after employer that he needed to be at least a junior and have more experience before they would give him a shot.

Fortunately, his persistence paid off. He finished his fall 2020 sophomore semester with straight As and was offered and accepted an internship with Speedway as a point-of-sale developer, which he started that spring.

“I was assigned two mentors and my first project. My project was to replace Speedway’s card encryption and decryption program used on their point-of-sale systems,” he said. “I learned about programming for a business and used programming languages and practices that I had never used before.”

Williams worked for Speedway as an intern for the next two years, while continuing to excel in his studies at Wright State.

At the beginning of his junior year, Williams learned about the 4+1 program offered by the Department of Computer Science and Engineering and enrolled in the program. The 4+1 streamlined program allows students to earn a Bachelor of Science and a Master of Science in five years.

Soon after, Speedway made him an offer of full-time employment upon graduation and he was also offered a job as an undergraduate research assistant. He decided to work both part-time jobs during the summer of 2021.

“The research was an amazing opportunity where I worked alongside genius graduate students and gained tons of experience with computer vision, image processing and the OpenCV C++ library,” Williams said. “My job was to create a program that detected spatter and dark spots on layer images and extracted data about them. It color-coded the detected spots by size with high detection accuracy.”

His final year as an undergraduate was eventful, to say the least.

He had also completed three graduate courses through the 4+1 program and was granted another research opportunity through the Defense Associated Graduate Student Innovators and the Air Force Research Laboratory. This new opportunity would not only pay for his graduate degree but also serve as his master’s thesis.

“I love being in a leadership position and hope that’s where I end up some day,” Williams said. “If not that, I am also considering staying in school to receive a Ph.D. in computer science and becoming a professor.”