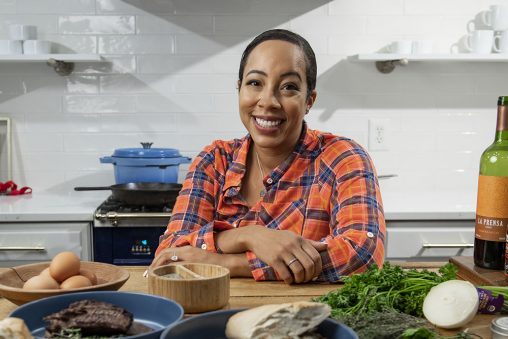 Roby graduated from Wright State University in 2005 with a bachelor’s degree in psychology.

“It is a huge honor to be featured again,” Roby said. “It’s even more exciting because I get to take viewers into the world of competition BBQ!”

According to Food Network, Monday’s episode features Celebrity Chef Michael Symon at the BBQ World Championship held in Memphis in May. Some of the biggest names in BBQ including Myron Mixon, Melissa Cookston and Roby go head-to-head.

The four-day competition featured teams from all over the United States representing the best of BBQ.

“Memphis in May is the World Championship, so the stakes are high, and it is intense on the BBQ circuit,” Roby explained. “Teams spend tens of thousands of dollars to compete, so getting an award call is everything to these teams and sometimes the stress shows.”

She added the championship is also a huge party where people get to compete in a BBQ sauce wrestling competition. 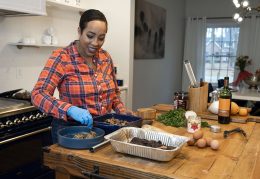 Her team, Blue Smoke Blaire, cooked brisket and ribs in the competition. Roby said she ended up with a perfect brisket score and tied for first place. For ribs, which is one of the three overall championship pork categories, she came in fourth place overall out of 104 teams.

In recent months, Roby has traveled across the United States in an RV exploring the best BBQ around in her digital series called, “The Pit Stop with Blue Smoke Blaire.”

“All of the restaurant owners were so welcoming and shared so much of their journey from the corporate world into entrepreneurship,” she said. “I found it energizing to see the American dream in the form of BBQ. It didn’t hurt I got to eat award-winning Texas BBQ for a month straight!”

Roby told Dayton.com she has plans to host pop-up restaurants in Dayton next month.

“I‘ve been traveling as a BBQ ambassador since last year and can’t wait to be back home serving my community,” she said.