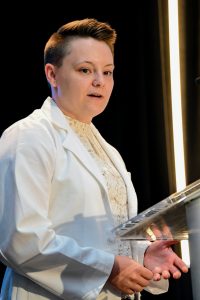 The leadership and academic bowl is an all-service national competition that culminates in an academic championship at Catholic University of America in Washington, D.C. Zinn delivered her speech at the closing ceremonies on June 27.

Zinn said it was an enormous honor to be chosen to speak at the awards ceremony and that she hoped she could impart a little of the wisdom that she has learned while finding her own purpose and path. The three focal points of her speech included learning to ignore bad advice, finding another way in when one door closes and learning from moments of vulnerability.

Zinn said her journey has not always been clear or easy, but even as a high school sophomore she knew she wanted to join the Army. In fact, after attending her great uncle’s 60th West Point class reunion and its summer leader experience, she was more convinced than ever.

“After that, I was absolutely hooked with the camaraderie, the dedication, the history, the commitment and the prestige,” she said. “I was so hooked, I genuinely thought it was my destiny to attend West Point.”

When she received her rejection letter from West Point, Zinn said, that at that point in her life, it was the largest and heaviest door of opportunity that had ever slammed shut in front of her.

She was offered a lot of well-meaning advice that she eventually rejected because she realized that while West Point was not part of her journey, she was on the right path and simply needed to find another way to accomplish it.

She said that she was able to sift through all the “bad advice” in the midst of her doubt and disappointment by focusing on her “why.”

“Sometimes all it takes is going back to your why and refocusing on the multiple pathways that can help you achieve your goals and looking for indicators that you’re headed in the right direction,” Zinn said. “Why do I want to go to college? Why do I want to serve in the Army? Why do I want to be a doctor?”

Zinn said she learned to trust herself as the best person to make decisions for her own life and enrolled at Ohio State University, where she graduated with a bachelor’s degree in biology and a minor in military science in the spring of 2021.

It was during that time that she also learned a lesson about destiny, because in 2017, shortly before she enrolled in college, her brother died by suicide.

“Had I been admitted (to West Point) I would have been away from home, isolated and without my support system when I needed them most,” she said.

It was during this moment of vulnerability that her path became increasingly clear.

While working through the devastating loss of her brother, Zinn learned to communicate openly about it, reaching out to others and sharing her experience. It made her realize that from this vulnerability came a strength that she would be able to offer to others as she pursued her medical career.

“I know I want to dedicate my life’s merits to serve others at the most vulnerable moments of their lives. And even more than that, I know my place will be within emergency medicine in critical care, experiencing the front lines of unbridled emotion and human vulnerability,” she said. “I cannot think of a greater privilege than serving others in times of incredible suffering and providing a source of strength and empowerment in moments of vulnerability.”

After she graduates from the Wright State Boonshoft School of Medicine, Zinn plans to pursue positions of leadership within the military both during her military residency and her four years of active duty as an Army physician while fulfilling her aspirations to serve others at their most vulnerable.