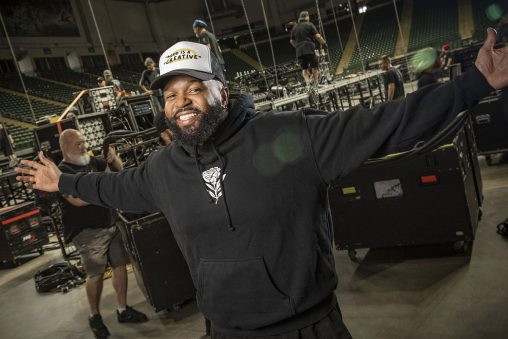 Many noteworthy students have matriculated at Wright State University, where they’ve navigated the tunnels alongside their fellow Raiders and graced the Quad with their presence.

Add to that list Isaiah Templeton, who graduated from Wright State with a bachelor’s degree in organizational leadership and is a rising star in the world of gospel music.

The Charlotte, North Carolina, resident returned to his alma mater for a performance with Elevation Worship on Aug. 12, where his sonorous tones enthralled the masses in the Wright State University Nutter Center.

“It was extremely exciting to perform in the same arena where I received my high school diploma and my bachelor’s degree,” Templeton said. “This was a homecoming for me. I have definitely come full circle. I still have friends and family in Dayton, and I was elated that they got to see me in this element. Many of them hadn’t, so it was a special night for me.”

Templeton has released two solo projects, “Roll in the Dirt” in 2014 and “This Life” in 2019. The former reached No. 25 on the Billboard Gospel Album charts in its debut year. Templeton has plans for a third release and will begin recording this fall.

“It’s been a while since I’ve recorded so I’m excited about that,” he said.

Born in Springfield, Massachusetts, Templeton moved to the Dayton area the summer before his first year of high school after his mother’s job transfer. He graduated from Centerville High School and subsequently continued his education at Wright State after being offered a great talent scholarship.

Templeton initially majored in vocal education, but after two years decided it wasn’t for him and changed his major to organizational leadership.

While at Wright State, Templeton served as a campus tour guide and was a member of In His Presence (IHP) Gospel Choir. In fact, his favorite Wright State moment revolved around the choir’s trip to the Bowling Green Gospel Fest.

“I have friends to this day that I made in that choir and on those trips,” he said. “IHP was definitely ‘my tribe’ while I was at WSU.”

Templeton grew up around gospel music as his parents both were involved in the local church ministry. His mother oversaw the children’s choir so he started singing as a little boy as far back as he can recall.

“I knew I wanted to make gospel music my career when my dad overheard me singing one day in his car and turned and looked at me with a shock facial expression,” Templeton said. “The look on his face as the affirmation I needed to pursue singing as a career. Today, my enjoyment comes from watching people get lifted and encouraged from the songs I/we sing.”

Templeton serves as worship leader at churches in Charlotte and Atlanta, but gospel music is his bread and butter.

“Music has raised me and continues to pay me,” he said. “I’m grateful I get to make a living doing what I love.”

Ultimately, Templeton would like to give back to latent musicians some of what gospel music has afforded him.

“I want to pour into the next generation of vocalists,” he said. “One day I’ll have a camp where they can come and cultivate their gifts. The future will always hold space for God and love for people. That will always be the priority.”

Although his path was altered somewhat and he took a bit of a detour while at Wright State, the lessons Templeton learned helped him become successful personally and professionally.

“Wright State taught me it’s OK to change your mind…to start over,” he said. “To keep starting over until it works. Leaving the music department, I felt like a failure. Music had always been my passion and it came so easy to me. But the style of music mixed with the theory kind of took the fun out of it for me. So I had to make a decision. I changed my course but I still finished. And in life, I’ve learned that sometimes the course, the route, the plan changes … but you can still win. You can still finish.”