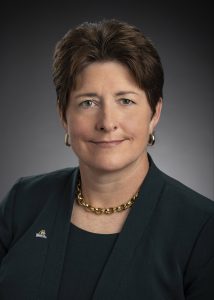 Amy Thompson is the provost and senior vice president for academic affairs at Wright State.

Six Wright State alumnae, including Andrea Kunk, a member of the Wright State University Foundation Board of Trustees, were also named to the 2022 list.

Compiled by the Dayton Business Journal’s editorial board, the Bizwomen Power 50 list recognizes many of the region’s most influential women in the business community.

She oversees academic affairs at both of Wright State’s campuses, including the undergraduate and graduating degree programs, faculty affairs, accreditation, the University Libraries and research programs.

Thompson takes a student-centered approach to her work and decision-making, ensuring that students are supported, find success and graduate in a timely fashion.

She also takes pride in supporting faculty, staff and administrators and helping them overcome the obstacles and challenges they face to meet their goals.

Before joining Wright State, Thompson served as the senior vice provost of academic affairs, acting dean of the College of Graduate Studies, vice provost and associate provost of faculty affairs, and professor of public health at the University of Toledo. 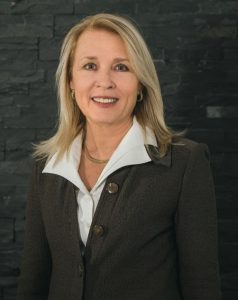 Dawn Conway joined the Wright State Board of Trustees in 2021.

In 2021, Conway was appointed to the Wright State Board of Trustees for a term ending in 2029.

Previously, she was the chief operating officer of the public relations company Cision, where she led sales, marketing, finance, analysis, research and content acquisition, and held key leadership positions at LexisNexis over a 20-year career.

Conway is a member of the District of Columbia Bar. She received her J.D. from California Western School of Law and a Bachelor of Arts from Regis College.

Wright State alumnae who were named to the Bizwomen Power 50 list: