The long way around 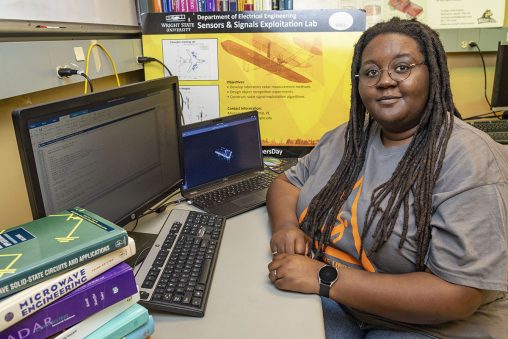 Javonne Baker, a graduate electrical engineering student in Wright State University’s College of Engineering and Computer Science, has had a love of math and science from a very early age.

In the seventh grade, she was accepted into Wright STEPP, an education intervention program for at-risk and underrepresented students. The program helped to enhance preparation for postsecondary education in science, technology, engineering and math (STEM) related fields.

“My math teacher had told me about it. She was the one who recommended me for it. I guess she saw something in me that I didn’t see,” Baker said. “I’ve always been interested in math and science. It was just kind of a go-to for me. And coming from an underprivileged household, the idea of having my education paid for was really nice.”

Through the program Baker was able to explore the many aspects of STEM, including computers, engineering, electronics and mathematics.

“I’ve always enjoyed math. It was all about patterns for younger me. And later I learned how to apply it,” she said.

Baker originally enrolled at Wright State in 2010 to pursue a degree in computer engineering, but after taking her first Java class, she decided that it wasn’t for her and changed her major to electrical engineering. Unfortunately, shortly after finding her path, she had to step away it for a while when her mother was laid off from her job and she decided to help her out.

During her time off from Wright State, she worked in health care and went to the Miami Valley Career Technology Center, completing its electrical trades program.

“It put a fire in me to go back to school. I just really love learning,” Baker said. “I love the theory behind everything and how it works, and I also enjoy the hands-on stuff too. I ended up getting a job with the local plumbing and pipe fitting union and learned to weld and do a lot of plumbing stuff, which was really fun, but I still had that itch to learn more, which is why I ended up going back to Wright State.”

One of her biggest challenges was juggling work and school. When she decided to continue pursuing her degree, Baker still worked in health care part time and as an undergraduate research assistant while taking classes part-time.

She said that eventually she and her husband worked through their finances and decided that it would be worth it in the long run for her to enroll full-time, keeping only one of her jobs.

“As long as I could make my part of the rent with the research assistant job, we agreed that I could go back to school full-time, which was also a huge adjustment,” Baker said. “I hadn’t been in school full-time since high school. I never thought I would be able to do it but I did and with a decent GPA.”

This summer Baker participated in the Autonomy Technology Research Center Summer Program, a collaborative research experience in which university students, faculty members and industry and government personnel work together to solve challenging Air Force problems in sensing and autonomy technologies. Students work with an Air Force mentor at Wright State or Wright-Patterson Air Force Base.

Baker worked with a mentor at the Air Force Research Lab RY division at Wright-Patterson Air Force Base. One of the most interesting things she got to do was work with synthetic aperture radar and learned about CAD modeling and how to make images from that.

“I did a lot of stuff with radar and radar imaging, which piqued my interest,” she said.

Advice she would give to incoming students is don’t be afraid to talk to their instructors and classmates.

“Don’t be afraid to ask for help and try to put yourself out there. Talk to your classmates and professors,” Baker said. “Even if you don’t know something, someone else might. And don’t be afraid to talk to your professors about research opportunities. Someone usually has something going on somewhere and everyone’s willing to teach you something.”

Baker began working on her master’s degree in electrical engineering this semester and her career aspirations are to continue to work with radar.