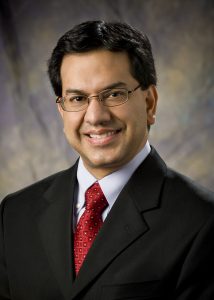 A practicing physician, Anuj Goyal received a three-year term as a national trustee on the Wright State Board of Trustees.

Anuj Goyal, M.D., was reappointed as a national trustee on the Wright State University Board of Trustees.

During its Sept. 16 meeting, the Board of Trustees voted unanimously to appoint Goyal to a three-year term, which expires in September 2025.

Goyal was initially appointed as a national trustee for a three-year term that began in 2019. Previously, he served as a voting member on the Board of Trustees from 2013 to 2019.

The board includes four national trustees who serve for three years as ex officio, nonvoting members. National trustees are selected for the capabilities and expertise that they can offer to the Board of Trustees in support of Wright State.

The Board of Trustees also includes nine voting members and two student trustees who are appointed by the governor of Ohio.

A practicing physician in the Dayton area, Goyal is the medical director of the Cardiovascular Intensive Care Unit at Atrium Medical Center and Miami Valley Hospital South.

Previously, he served on the Board of Trustees of Good Samaritan Hospital and as Good Samaritan’s chief of staff and medical director of the Cardiovascular Intensive Care Unit.

Goyal is a product of and a strong supporter of public education, starting from kindergarten at Primary Village South in Centerville through his final medical training. He received a bachelor’s degree in chemistry from The Ohio State University and his medical degree from the University of Cincinnati College of Medicine with his residency in internal medicine. He completed his training at the Ohio State Medical Center, subspecializing in pulmonary diseases, critical care and sleep disorders.

He resides in Centerville, where his son attends high school; his daughter is a student at the University of Michigan.