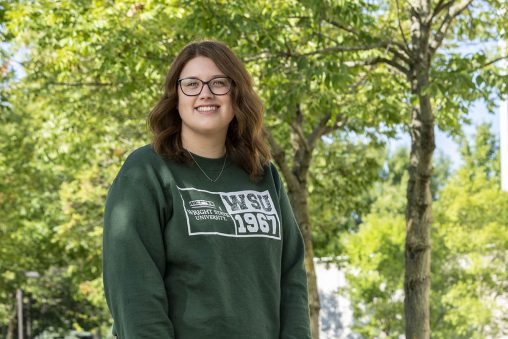 During her senior year of high school, Emma Porter visited Wright State’s campus and knew immediately it was where she wanted to go.

“It’s such a great environment,” Porter said. “I think it’s really easy to fall in love with and feel at home here.”

Porter is a resident assistant (RA) in Forest Lane. An electrical engineering major with a minor in math and business, Porter came to Wright State in 2019 after graduating from Northmont High School. She received the Morris Family Endowed Scholarship.

She also works in event services at the Student Union, lauding the importance of how the staff is flexible with her schedule as a student and employee.

“They understand that I’m a student first,” Porter said. “Maybe I can work for 30 minutes, but then I have to go to a class and they’re so understanding. It feels like a big family sometimes.”

Before coming to Wright State, Porter had traveled the world and across the country. She was born in England—her father was stationed there with the U.S. Air Force. She also lived in Nebraska, Washington, D.C., and Maryland before her family settled in Clayton, Ohio.

During her first year at Wright State, Porter commuted. Since then, she has moved into the residence halls.

“It’s a great atmosphere and we do so many fun programs,” Porter said of residence hall life. “I had a single in The Woods my sophomore year, and it felt so much different, like the college experience you think of.”

As an RA, Porter plans programs for residential students, including creative projects, and works with her campus community.

“I love crafting. We do door decorations and bulletin boards—that’s when I ended up my best as an RA,” Porter said. “Programming is fun because you collaborate with other people. It’s a lot of responsibility, but it’s so fun.”

The most recent event Porter helped plan was a tie-dye party for residents. “This past spring semester we had our community-wide event. We got a bunch of stuff to tie dye, like scrunchies and tote bags,” she said.

As Porter begins her senior year, she looks forward to the different opportunities to use her degree. “I think that’s the great thing about engineering,” Porter said. “There are a ton of possible things I can do after graduating. I will have options and don’t have to stick with one thing.”