Homecoming to feature basketball as the centerpiece for its celebration 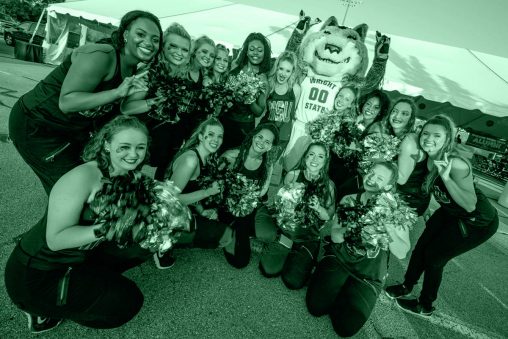 In 2023, Wright State will make a seasonal change to Homecoming Week. Rather than hosting events based around the club football and soccer seasons, the event will spotlight the Wright State basketball teams during spring semester.

Associate Athletic Director Brandon Hays and his colleagues say the shift away from a fall Homecoming will be a change for the Wright State community, but a positive one.

The Homecoming Committee, which includes staff from Student Affairs, Advancement, Alumni Relations, and Student Involvement and Leadership, discussed moving Homecoming to celebrate the basketball teams. After the excitement of the last year with the university’s first NCAA DI men’s tournament win, 2023 is an optimal year to present the new experience.

“It will be great getting people together again. It’s a good time to give it a shot and see what happens,” Hays said.

The dates for Homecoming were announced when Wright State received the Horizon League schedule. Homecoming will take place during last weekend in January, Hays said.

Hays said he was excited by the move to a spring semester Homecoming. He hopes the move will encourage more participation among campus departments, organizations, and alumni.

In its earlier years, Wright State did not host an annual Homecoming, instead opting for an event known as Raider Days. In 1997, the Wright State community decided to install Homecoming as a permanent, annual event. Wright State has hosted spring Homecoming events, but some were single-day events rather than a whole week.

Brooke Leppla, associate director of alumni and donor marketing and communications, said the move to spring semester was part of an effort to generate more student, alumni, and community spirit.

“It makes sense to try something new to reach and engage more people in Homecoming festivities and encourage them to support their alma mater,” Leppla said. “I think it will have a positive impact and hopefully begin to create deeper traditions that will keep graduates coming back in the future to participate and celebrate.”

Dean of Students Chris Taylor, Ph.D., said he hopes event attendance will increase with the shift to a basketball-focused Homecoming Week. He said it was important to tie Homecoming Week to a sports event and basketball seemed the appropriate choice.

“I think for some it will be a shift, but our hopes are that attendance will increase involvement and excitement,” Taylor said. Despite the shift to a winter Homecoming, Taylor said he hopes to plan a spirit week in the fall to maintain a fall-focused celebration.

“I’d love to see the Nutter Center completely filled up. We’re always looking for opportunities to have an unforgettable atmosphere where the building is full. This could be one of those opportunities,” Hays said. “Basketball games are the biggest gatherings on campus, aside from graduations. We want as many people as possible to see our basketball programs, which have had a ton of success.”

The 2021–22 men’s basketball team earned their way into the NCAA’s March Madness, where they won a First Four game against Bryant at UD Arena before losing to Arizona. The Wright State community came together to support the Raiders as they advanced to the national tournament, hosting watch parties on and off campus.

“As an alumnus myself and a proud staff member, it has been awesome to see the momentum and support our basketball season has garnered both by students and alumni,” Leppla said. “This will be another opportunity for students to get excited and showcase their Raider pride.”

In 2020, during the height of the COVID-19 pandemic, Wright State’s Homecoming Week events were largely virtual, featuring drive-in movies and online events, such as a Town Hall, a virtual mixology class, and alumni speakers.

“Homecoming will encourage us to be at our best. Admissions and enrollment management, student activities, athletics, marketing—we all need to come together to give the best show to potential students,” Hays said. “It’s in everybody’s interest to give the best show ever and build the university up.”

The Athletics Department is considering giving out basketball game tickets to students who have been accepted to Wright State University to encourage the students to be part of the Wright State community.

“I think this is a great way to give the best show of Wright State,” Hays said. “Whether you’re in your 70s or 80s and want to bring back fond memories and see people from your college days or you’re a prospective student, there’s something for everybody.”

In previous Homecoming Weeks, students, alumni, faculty, and staff watched men’s and women’s soccer and volleyball games and participated in other events such as Chalk the Campus, Live Band Karaoke, Trivia Nights, scholarship brunches, pep rallies, club-centric galas and events, and the Wright Day to Give, a campus-wide event that encourages donations to make an impact for all Raiders.

In 2021, more than 1,000 people participated in Wright Day to Give, raising over $176,000 to give back to the Wright State community. The money goes toward student scholarships and support. While Homecoming is moving to the spring term, Wright Day to Give will remain a fall event in 2022, commemorating the university’s founding.

Many of Wright State’s Homecoming Week traditional activities take place outside, which may not be possible during cold winter months. Discussions are already taking place to relocate them. Hays said the Nutter Center is large enough to host these activities while avoiding inclement weather. Clubs and groups are also able to hold events indoors on campus.

Hays suggested that Greek life reunions or other groups could use conference rooms, while other events—like the chili cookoff or large-scale student events—could take place in the arena or auxiliary gym. Other events will likely take place on campus.

“There will be something for everybody,” Hays said. “There’s plenty of space in the Nutter Center and even if you don’t care for basketball, I would still invite people to come. It will be really cool.”

The Homecoming festivities will include Alumni Achievement Awards. Leppla said the Wright State Alumni Association is looking into activities and events that would interest alumni to encourage them to come back to campus.

Leppla also anticipates that moving Homecoming to January will enable more current students to connect with alumni, and more alumni will be able to connect with Wright State.

“The ultimate goal is fostering school spirit and pride,” Leppla said. “I believe there is a real opportunity here to grow both.”

Stay up to date on all Homecoming events at wright.edu/homecoming.