Ermal Fraze: the essence of a ‘can’-do entrepreneur 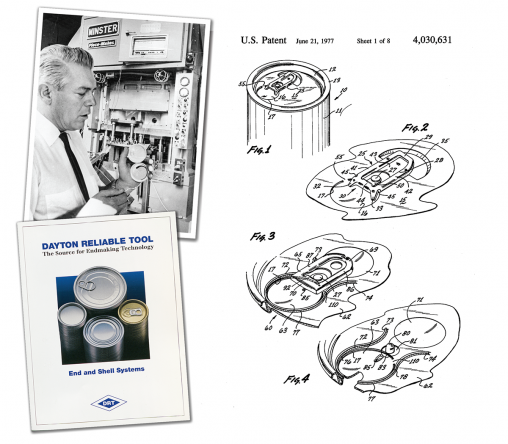 “I blew out my flip flop, stepped on a pop-top, cut my heel, had to cruise on back home.”—from “Margaritaville,” Jimmy Buffett

If you are older than 50, you probably know Buffett was referring to the pull-off tabs that used to be on beer and soda cans and littered our sidewalks, streets, beaches, and parks in the 1970s. The pull-off tabs were a safety and environmental problem and were eventually replaced by the push-in and fold-back tabs we see today.

Did you know that both the pull-off tabs and push-in and fold-back tabs were designed in Dayton by entrepreneur Ermal Fraze?

Fraze was born in 1913 in Indiana. He earned a degree in mechanical engineering from the General Motors Institute in Flint, Michigan, and later moved to Dayton. In 1949, he formed the Dayton Reliable Tool Company, a machine tool business.

In the late 1950s, Fraze attended a picnic and forgot to bring his “church key” can opener. He improvised, using his car’s bumper to open drinks for himself and other picnic-goers. The event inspired him to devise a new way of opening cans, without the need for a separate tool. Others had tried before, but no one had yet developed a reliable self-contained-opener can that also maintained a sound seal. Fraze’s successful design used an integrated rivet to secure the tab—the rivet was a part of the metal on the end of the can.

Fraze sold the rights to his design to the Aluminum Company of America (ALCOA). The first ALCOA customer to use the pull-off tab was Iron City Beer in Pittsburgh. In the first year of using the tabs, Iron City’s sales increased by 400 percent.

Fraze continued to improve upon his designs, attaining 127 U.S. and international patents over the course of his career. By 1977, he patented the push-in fold-back tab, called the “Easy Open Ecology End.” This improvement allowed a can to be opened without removing a potentially sharp metal tab, thus reducing litter and improving safety—something any “Parrot Head” could appreciate!

The new design caught on quickly. By 1988, over 150 billion cans were manufactured with Fraze’s Easy Open Ecology End design.

Ermal Fraze was a remarkably successful and iconic Dayton inventor and entrepreneur. By the time of his death in 1989, Fraze’s estate was valued at more than $40 million. His family generously donated to the local community, including funding for a performing arts center in Kettering that bears the family name. Each year, the Fraze Pavilion brings renowned musicians and vocalists to its open-air venue, enlivening Lincoln Park and bringing joy to concert goers—none of whom need worry about the dangers of pop tops!

If you would like to learn more about Ermal Fraze, please visit Wright State University Libraries’ Special Collections and Archives. His papers, along with those of other Miami Valley entrepreneurs, including John Patterson, Luzern Custer, and Charles Kettering, are available to researchers.

For more information on the collections in the University Libraries Special Collections and Archives, visit libraries.wright.edu/special.