Wright State University receives a $3.6 million gift from Reynolds and Reynolds to create an Entrepreneurship Bootcamp for Veterans and new scholarships for business students

A $3.6 million gift from the Reynolds and Reynolds Company and its foundation will launch an Entrepreneurship Bootcamp for Veterans at Wright State University and create new scholarships for business students.

Details of the gift were announced at an event on Thursday, Oct. 27, at the ReyRey Café in Wright State University’s Rike Hall.

The Reynolds and Reynolds Entrepreneurship Bootcamp for Veterans (EBV) will further expand the collaboration between Reynolds and Wright State while supporting the success of military veterans who are aspiring entrepreneurs.

Post-9/11 veterans with honorable discharge are eligible to apply for the program. There is no requirement that applicants be enrolled as a student. 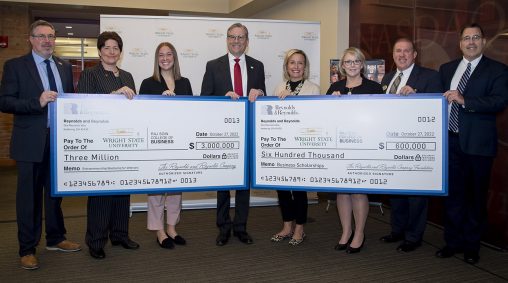 Veterans admitted to the EBV will begin their educational journey with a 30-day online course on entrepreneurship fundamentals. Students will then participate in an eight-day residential experience at Wright State.

The residential experience — including travel, food, accommodations, curriculum, resources and entertainment — is provided at no cost to the veteran. Upon completion of the residency, 12 months of ongoing support, focused on small business creation and growth, is provided to graduates of the program. Wright State entrepreneurship students will also support and benefit from interactions with the veteran entrepreneurs.

A $3 million gift from Reynolds and Reynolds will create an endowment to permanently underwrite the costs of the EBV.

“The service men and women that defended our right to life, liberty and happiness must not themselves be obstructed from achieving their own American dream,” said Chris Walsh, president of Reynolds. “We are honored by the sacrifices they have made, and this is one way we thank them for their service — by helping ensure there is a path toward a fruitful future for them when their service ends.”

In addition to the $3 million commitment to the EBV, The Reynolds and Reynolds Company Foundation has pledged $600,000 over the next three years for scholarships for Wright State business students.

Students selected for the Reynolds and Reynolds Business Scholarship will receive an annual scholarship of $5,000 that is renewable for each year of their undergraduate education at Wright State.

“The foundation wants to recognize students that are investing in their own education,” said David Shimek, senior vice president of corporate development. “These scholarships are meant to give a boost to excellent business or STEM students that have a financial need.” 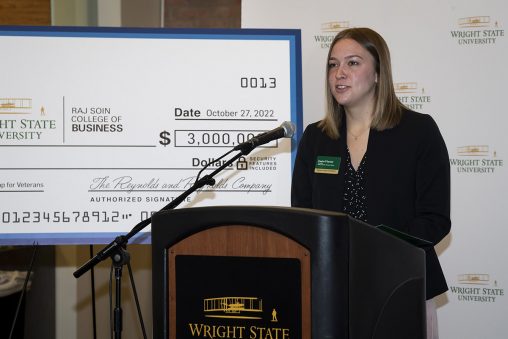 Kayla O’Daniel, a senior accountancy major, talked about the impact scholarships have had on her life as a Wright State student.

“These two gifts promise to expand the impact of Reynolds and Reynolds on Wright State’s business students and on military veterans by inspiring entrepreneurial endeavors that form the basis for economic growth,” said Thomas Traynor, Ph.D., dean of the Raj Soin College of Business. “They also reaffirm and widen the commitment that Reynolds and Wright State have to the Greater Dayton region and its economy.”

Reynolds also employs many Wright State graduates at its corporate headquarters in Dayton.

“The Reynolds and Reynolds Company has been a wonderful partner to Wright State University for many years. They have provided life-changing scholarships to students across many majors, and their support of business programming in the student-operated ReyRey Café in Rike Hall has been invaluable,” said Traynor. “We are proud that Wright State and the Raj Soin College of Business have produced many talented graduates over the years to help support Reynolds’ workforce needs.”