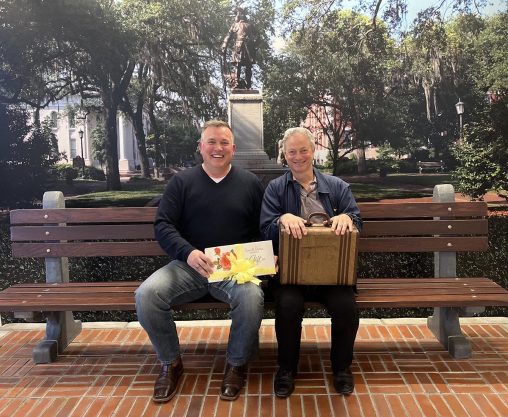 Wright State alumnus Mike Thirtle and Gary Sinise on the bench in Savannah, Georgia, where Tom Hanks sat in the filming of “Forrest Gump.”

As a full-time military officer at Wright-Patterson Air Force Base, Mike Thirtle had little free time to take night classes at Wright State University. But he made time.

That determination turned into two business master’s degrees from the Raj Soin College of Business, a career advising senior military and national security officials, and is now heading up the Gary Sinise Foundation, a nationwide cognitive health and mental wellness charity that provides care to military veterans and first responders.

Sinise is an actor, musician and humanitarian, perhaps best known for his role in the movie “Forrest Gump.”

“I am charged with ensuring that we are supporting veterans, first responders and their families,” said Thirtle, chief executive officer of the foundation. “My goals are to grow our mission to serve more and more people every day. There is such great need out there; the need is literally endless. It’s an honor and pleasure to support our nation’s heroes.”

Thirtle grew up in suburban Chicago. His father was a U.S. Army veteran serving during the Korean War.

While stationed at Wright-Patterson Air Force Base following his graduation from the Air Force Academy, Thirtle enrolled at Wright State where he took his first finance course.

Thirtle worked toward earning his Master of Business Administration with a concentration in finance for two years and then his master’s in social and applied economics the third year.

He said the highlight of his time at Wright State was the learning environment.

“It was not easy to work full time and be a night school student and sit in classes three nights a week at nearly three hours per night and then spend all week and weekend studying,” he said. “But to be honest, it was the best thing that I could have done at that point in my life as a 23-year-old.”

Thirtle said his classes sparked his desire to learn more.

“I learned a ton at Wright State and had the opportunity to apply what I was learning literally every day at work. It was this combination of learning and doing and repeating that cycle of learn-do that really enhanced my knowledge.”

“He was a standout student in my forecasting class — great all-around intelligence, hard-working, open-minded and always curious,” said Traynor.

Thirtle left the active-duty Air Force after five years as a captain and earned his Ph.D. from the RAND Graduate School in Santa Monica, California. He then worked at PricewaterhouseCoopers as a consultant in Los Angeles and later for a consulting group in the pharma/biotech market in Chicago.

Thirtle returned to the RAND Corporation as a full-time researcher, where he would spend the majority of his professional career at the think tank advising senior leaders in the military and in national security.

Prior to joining the Gary Sinise Foundation, Thirtle served as chief executive officer of Bethesda, a Wisconsin-based nonprofit that provides housing and health care support for people with intellectual and developmental disabilities such as autism and Down syndrome.

Thirtle said Wright State prepared him for success by helping him add more tools to his analytical and professional toolbox of problem-solving.

“I’m a data-driven decision-maker and that way of thinking was what I learned in my graduate studies in the business school at Wright State.”

When Thirtle was in the Air Force Reserve, he taught as adjunct faculty for about 15 years.

“I loved teaching and relearning the material that I had learned at Wright State and in my Ph.D. program. It was great to work with students over the years and help them in the same way that my professors at Wright State helped me.”