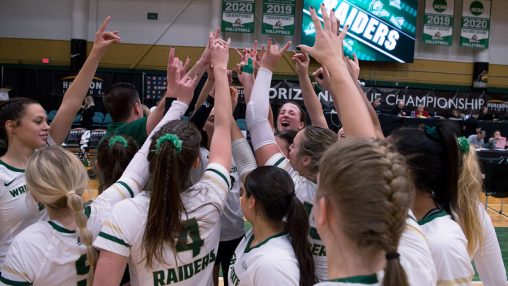 The Wright State volleyball team will play Georgia Tech in the opening round of the NCAA Championship on Dec. 1. (Photo by Joseph Craven)

The Wright State-Georgia Tech winner will advance to play the Marquette-Ball State winner in the second round on Friday, Dec. 2, at 7 p.m.

Wright State enters the NCAA Championship with a 28-3 overall record, while Georgia Tech holds a 20-7 overall mark. This will be the first-ever meeting between the two schools in volleyball.

Wright State punched its ticket to the dance with a sweep over Northern Kentucky in the Horizon League tournament.

The good news didn’t stop with the major awards, as Wright State recorded a league-high four First Team honors, with Taylor Bransfield and Callie Martin joining Stephenson and Story, while Aaliyah Byers was named to the All-Freshman Team.