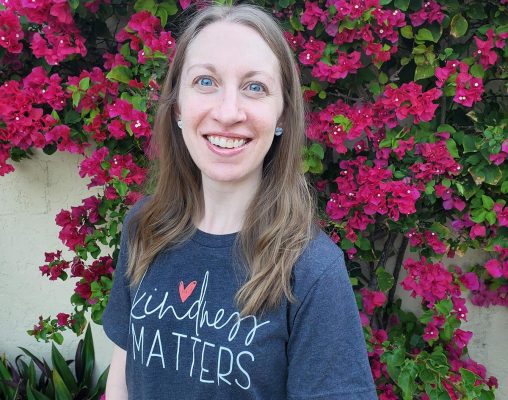 Kindness has always been one of the central themes in Brieanna Wilkoff’s life and in her newly published young adult novel, “I’ll Be There for You.”

Wilkoff, who graduated from Wright State University in 2004 with a bachelor’s degree in English, with a concentration in creative writing, said that after graduation she worked as an editor at an advertising agency for 15 years and most recently switched to working in marketing for a health care technology company.

However, she never lost sight of her dream of being a published author nor did she lose her desire to practice kindness on a daily basis and to try to inspire others to do the same.

“I love words and I have always been an avid reader,” she said. “My first story was written at age 8 as a gift to a friend. I still have it. The story was about the two of us going on a very short adventure. Throughout my childhood, middle school and high school, I dabbled in just about every type of writing, and around college-age, I started writing middle grade, then young adult fiction and that is pretty much what I have done ever since. That just felt like the right place for me and I really enjoy doing it.”

“I’ll Be There for You” is a story about an ’80s rock- and theater-loving 16-year-old girl who is struggling to come to terms with the death of her father and how the power of kindness helps her to heal.

Wilkoff said she began instilling the virtues of kindness in her own daughter, who is now 10 years old, from a very early age.

“She is an only child and an only grandchild on both sides. I realized she was going to have just crazy Christmases with gifts,” Wilkoff said. “I didn’t want the holiday season to just become a countdown to presents. I wanted it to be something that we lead up to by thinking about other people as well.”

They started a tradition in which on each day in December Wilkoff and her husband and daughter write down something kind that they could do for someone, put it on a post-it note and put them in a jar. Throughout the rest of the year, they randomly pull out a note and do what is on it.

One of the ways Wilkoff’s family chooses to spread kindness is by making contributions to the Ronald McDonald House, putting together and dropping off snack bags for the people staying there and organizing a stuffed animal drive. Wilkoff said the charity is particularly meaningful to her because her parents stayed at one when she had open heart surgery as a child.

After “I’ll Be There for You” was published, Wilkoff thought it would be nice to encourage other people to join in her kindness mission. In the book, characters use post-it notes to share kind messages on people’s lockers or car windshields.

This gave her the idea to create post-it notes that feature some of the art from the book. She would pass them out at author events to encourage people to use them to spread random messages of kindness and perform other random acts of kindness.

Wilkoff’s goal is to see if the movement can generate 50,000 acts of kindness, creating a kindness domino effect. She has been encouraging those who participate to post their acts of kindness on Twitter, Instagram and Facebook with the hashtags #kindnessdominoeffect and #50thousandactsofkindness so that they can be added to the total.

“It’s about trying to get people to think about kindness on a regular basis. For example, a waitress told me that she will randomly pick someone once a week and pay for their meal but not tell them it’s her,” she said. “It can also be something simple like the post-it notes, or my daughter will tell me if she sees someone in school who looks like they could use a friend, she will make a point to talk to them.”

Wilkoff said that if people aren’t comfortable posting on social media they can also let her know personally through the contact page on her website.

“I’ll Be There for You,” which is published through Winding Road Stories, can be found on Wilkoff’s website as well as on Amazon, Barnes and Noble and Bookshop.