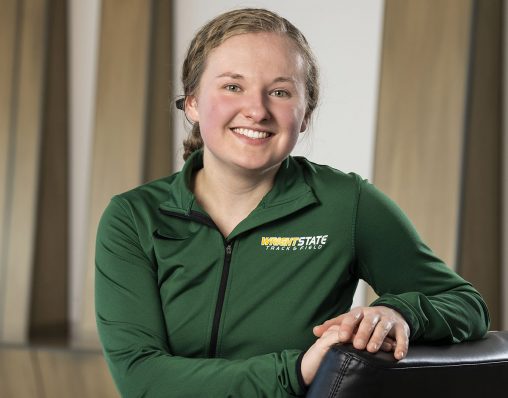 Abigail Halsey has been very busy the past six years, but she has loved every minute of it. This fall, Halsey will graduate from Wright State University for the second time, this time with a master’s degree in physical education.

In addition to her studies, Halsey is a member of Wright State’s women’s track and field and cross country teams.

“I grew up playing sports. I played soccer my whole life and then I got into running, which is what I did a Wright State. It was a lot to balance with school, but I absolutely loved being able to do both,” said Halsey, who earned a bachelor’s degree in sports science, with a concentration in sports medicine, from Wright State in 2020.

Because of her love of sports, as well as believing that they can be an important part of development for young people, she originally thought that a career that supported athletes, such as physical therapy, would be a natural fit.

“That’s why I chose the sports science route,” she said. “It had a majority of the prerequisites for physical therapy programs.”

However, during her time at Wright State, Halsey realized that occupational therapy was more to her liking.

After taking a certification course to become a certified autism exercise specialist, she found that there was a lot of research showing that children with autism who participate in aerobic exercise, such as running and walking, before completing daily activities and schoolwork, showed a decrease in their stereotypical behaviors.

But she said that neuromuscular exercise, which supports balance, coordination and agility, had received a lot less research and attention and wondered if it might also have a similar effect. This inspired her to develop an eight-week neuromuscular exercise program for children with autism as her master’s project.

Halsey said that stereotypical behaviors in children with autism are generally repetitive or disruptive behaviors, including stomping feet or running off.

“One of the most common behaviors in the children that I worked with were vocalizations such as repeating words and phrases,” she added.

Halsey worked with three children, ages 5 to 6, for eight weeks. During each session, she would engage the children in a series of physical neuromuscular exercises, such as fundamental movement exercises, at five separate stations. She would then rank the severity of their stereotypical behaviors during pre-, mid- and post-exercise intervention assessment sessions.

Halsey said she began to notice a decrease in the children’s stereotypical behaviors and that certain exercises had a greater effect on their behavior than others.

“I noticed that station number one, which involved exercises like walking and knee lifts, that their behaviors weren’t as severe,” she said.

She also found that the more the children were able to focus on the activity, the greater the impact was on their behaviors.

Halsey said she believes that the challenge for these students was greater because of disruptions caused by the coronavirus pandemic. The young children she was working with were already a year behind in developing the socialization skills that come from interacting with classmates in person.

After graduating from Wright State, Halsey plans to pursue her doctorate in occupational therapy at Northern Kentucky University, where she will continue her research. She would like to continue working with children in an educational setting and aspires to design and open a gym for children with disabilities.