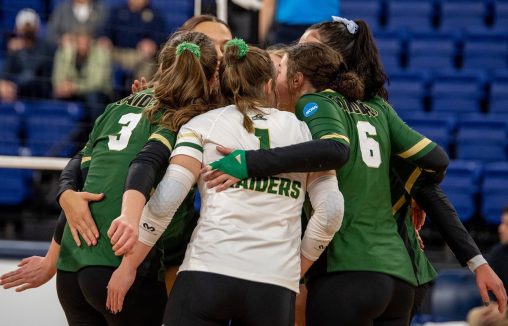 The Wright State volleyball team fell to No. 13 Georgia Tech in three sets on Thursday at the Al McGuire Center in the opening round of the NCAA Championship.

The postseason loss ended Wright State’s historic season in which the Raiders won a program-record 23 consecutive games, went undefeated against conference competition and made its third NCAA Tournament in the last four years.

Georgia Tech (21-7, 13-5 ACC) advanced to the second round of the NCAA Championship, where they will face the winner between regional host Marquette and Ball State. The Yellow Jackets hit .352 on the day with 41 kills on 91 attempts.

Wright State’s 28 victories in the 2022 season were its most since the 1989 season. The Raiders’ perfect 18-0 Horizon League record marked just the fourth time in conference history a team finished the regular season with three losses or less, joining Milwaukee (1999 and 2007) and Wright State from the shortened spring 2021 season. The Raiders ended the year with the only two undefeated league seasons in Horizon League history, 2021 and 2022.

Several Raiders collected honors as part of the 2022 Horizon League Volleyball Awards, led by Jenna Story’s fourth consecutive Defensive Player of the Year honor. Fellow fifth-year senior Lainey Stephenson earned Setter of the Year honors for the second time in her career, and first-year head coach Travers Green was named the Horizon League Coach of the Year. The good news didn’t stop with the major awards, as Wright State recorded a league-high four First Team honors, with Bransfield and Martin joining Stephenson and Story, while Aaliyah Byers was named to the All-Freshman Team.