A need to help others 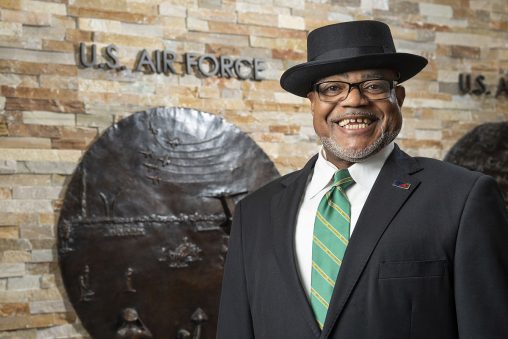 Anthony Windsor, an Air Force veteran and graduate social work student at Wright State, received a regional Student of the Year Award from the Ohio Chapter of the National Association of Social Workers. (Photos by Erin Pence)

Anthony Windsor’s decision to pursue a career in social work was personal — he wanted to honor his friends and fellow veterans who have died by suicide, while also helping other veterans who are struggling.

Windsor was inspired to enroll at Wright State University by a social worker at the Dayton Veterans Administration Medical Center, who told him if he truly wanted to help other veterans, he needed to go college, earn both undergraduate and graduate degrees in social work then get a job at the VA.

So that’s what the Air Force veteran set out to do.

Windsor is already having an impact on the lives of veterans, local residents and Wright State students. “I have a need to help people,” he said.

He interns at the Dayton VA in the inpatient psychiatry unit. Once a week, he picks up food from the Foodbank of Dayton and distributes it to veterans who are hungry.

“I know there are a lot of veterans out there who need help but won’t ask for help,” he said.

At Wright State, he has solicited donations for the Social Work Club’s annual Christmas for Kids Campaign and packed more than 100 backpacks to raise awareness for mental health issues on campus. He is also a member of the Phi Alpha Honor Society, which brings together social work students in the support of humanitarian goals and ideas.

After the 2019 Memorial Weekend tornadoes in Dayton, he set up his barbecue stand on various corners around Dayton and distributed food and water. His efforts drew the attention of the World Central Kitchen, founded by chef José Andrés, and Windsor agreed to volunteer with the organization and distribute food if other disasters hit the Dayton region.

He is also a member of the Huber Heights Military and Veterans Board, the American Legion Post 776 in Riverside and the Edward Dugger Jr. Military Masonic Lodge in Huber Heights.

As a social worker, Windsor said, he has an obligation to help others.

“We have a responsibility to advocate for those who can’t help themselves,” he said. “That’s one of the things I’ve been taught by my professors here. It’s your job as a social worker.”

He was named a regional Student of the Year by the Ohio Chapter of the National Association of Social Workers. He was honored for the region that includes Greene, Montgomery, Champaign, Clark, Darke, Miami and Preble counties.

The award recognizes social work students who have demonstrated great passion and aptitude for the field of social work. Honorees must excel academically, in their field placements and in extracurricular activities.

One of the eight regional recipients will be named the statewide student of the year next spring. 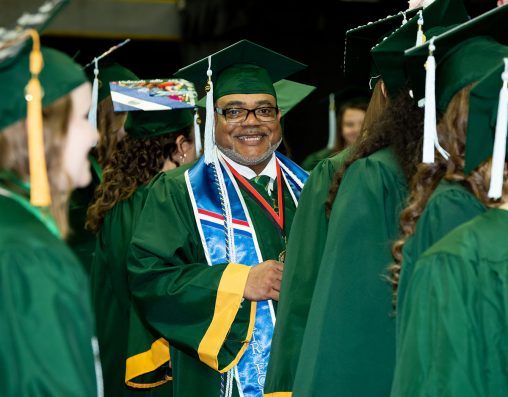 Hyejin Kim, Ph.D., associate professor of social work and director of the Master of Arts in Social Work (MASW) Program at Wright State, said Windsor is well-deserving of the award.

“Anthony’s endless, continuous volunteer experiences as a social worker, a community board member and even a cook reflect his dedication and passion for helping others in various, meaningful ways,” Kim said. “He is respected for his high moral and ethical standards by his peers and professors, and I feel so honored to have him in our MASW program.”

Windsor credits many at Wright State for his success, including the faculty and staff in the Social Work Program, the Veteran and Military Center, the Dunbar Library staff and the Math and Writing centers.

“If it wasn’t for Wright State, the social working faculty, the Math Center, the Writing Center and, more importantly, the veteran center I wouldn’t be where I’m at today,” he said. “I owe the award to them, to the whole of Wright State.”

Windsor is originally from Pittsburgh. His father was serving in the Air Force in Vietnam when he was born. His mother worked as a contractor for the Air Force and is a community advocate who has worked for such causes as voting and equal rights. Because of his father’s career, the family lived around the world, including on bases in Turkey, Pennsylvania, South Carolina and at Wright-Patterson Air Force Base.

After graduating from Wayne High School in Huber Heights, Windsor followed in his father’s footsteps and joined the Air Force.

Windsor served as a firefighter for six years at Wright-Patterson Air Force Base, Osan Air Base in South Korea and Aviano Air Force Base in Italy.

Windsor said the military helped him learn about different cultures and grow.

But working as a first responder was not easy, and Windsor experienced traumatic incidents that caused him to have post-traumatic stress disorder.

He received a lot of support from his family, especially his wife, Virginia, and his church, Mt. Pisgah Baptist, and was treated for PTSD at the Dayton VA.

It wasn’t easy, but through hard work and perseverance, Windsor got better. He credits his faith in God for helping him through those uncertain times.

“I’m just thankful the VA was able to get me help and to get me better,” he said.

His treatment actually inspired him to start his barbecue business.

When he retired from the Air Force, he had an aversion to fire, so his psychologist and psychiatrist suggested he try to overcome his fear through exposure therapy. He started by being around a small flame for a short amount of time while practicing mindfulness techniques.

Eventually, he became more comfortable being around fire. After a neighbor gave him an old BBQ grill, Windsor started cooking and soon a therapeutic technique grew into a love for barbecuing and smoking food.

“It became a passion of mine,” he said.

As a student at Wright State, Windsor returned to the Dayton VA as an intern, providing support to veterans in the inpatient psychiatry unit. He also volunteered at an annual Stand Down Event, providing resources and supplies to veterans.

As a veteran, Windsor uses his personal experiences to connect with other veterans and get them the help they need. So many veterans are struggling with substance abuse disorders, problems at home, PTSD and mental health issues, he said.

When he talks with veterans, he shares his own story and lets them know there’s always hope.

After graduating with this master’s degree next spring, Windsor plans to follow the advice he received several years ago and join the Dayton VA staff.

“That’s why I started this journey,” Windsor said, “to honor my friends who have passed.”