A ‘gem’ of a team takes silver in Paris 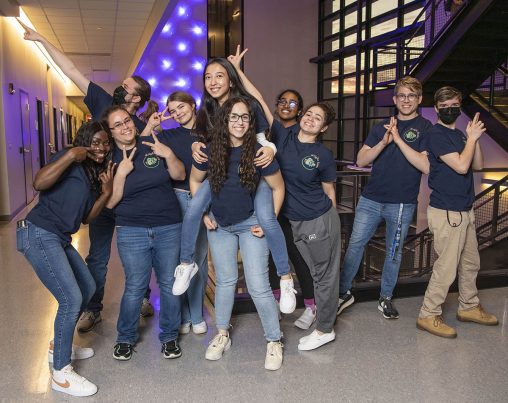 Their project? How to detect dangerous manganese in drinking water and soil. Their competition? About 6,500 students competing across 45 countries in 346 other teams. Their high honor? A silver medal.

They are Wright State’s International Genetically Engineered Machine (iGEM) team, part of Biotechnology Outreach Bolstered through Education in STEM and Development, or BioBESTD, a Defense Department program to develop a national workforce in biotechnology.

Scientists from Wright State’s Department of Biochemistry and Molecular Biology and the Air Force Research Laboratory mentored the team.

“We’ve been working on this since February 2022,” said Jaidan Peters, a senior majoring in biochemistry and molecular biology from New Carlisle. “It was an almost yearlong effort, to do the preliminary research, collect data — this has been our baby. To see our hard work come back to us in the form of a silver medal, we’re all excited and proud of what we’ve done.”

The silver medal recognizes that the team’s project exceeded a number of standards. Other teams earned silver honors, as well as higher gold awards and lesser bronze honors.

The event was the iGEM Grand Jamboree, a global synthetic biology competition for young science, technology, education and math researchers. Peters, who traveled to Paris for the competition, said there were about 3,500 participants there in person and 3,000 taking part online.

Madhavi Kadakia, Ph.D., vice provost for research and innovation, said the team’s project “involves the development of a biological sensor to detect manganese from water and soil samples. Their rationale was the manganese levels above World Health Organization limits occur in developing countries and are associated with neurologic dysfunction and Parkinson’s-like disease.”

Kadakia, who accompanied those on the iGEM team who went to Paris, said the team “worked on a sensor for detecting manganese contamination in water and soil samples using synthetic biology approaches to both sense and sequester manganese.”

The goal is to use the system to filter manganese from drinking water in a better way than existing methods.

“Everyone focuses on lead,” Peters said, “but how many people know about manganese contamination? It’s just as bad. We were meeting a need that we felt wasn’t being met.”

The members met as a team for about an hour a week and otherwise worked on their own. They also met with their mentors weekly.

The team members, their class, major and hometown are:

Craig and Gruenberg were with Kadakia and Peters in Paris.

Noting that not all the team members were biochemistry majors, Peters said, “The bond is we all have a passion for science.”

He added that being on iGEM shows a passion for research experience and leadership.

Wright State’s iGEM team was founded in 2021 with funds Kadakia secured. The iGEM team is supported through a subcontract through UES, Inc., and is part of the larger BioBESTD program.

That 2021 team won a bronze award. Kennel was a member of that team.

“Being a part of last year’s team definitely showcased the challenges of conducting a science competition in the midst of a global pandemic,” she said. “Having to adjust our project to accommodate virtual means was a first for our mentors. That’s why as a returning iGEM team this season we were very fortunate to have that experience from last year to help guide us.”

As for this year, she added, “I am not shocked that we received the rating that we did and knew we would perform well with how much preparation we did for the competition, but to be completely honest I found out the results during my 8 a.m. calculus class and had to contain myself from jumping out of my seat. I am really proud of what our team was able to accomplish this year.”

“Maybe next year,” Peters said, “we’ll get a gold medal.”