A love for school 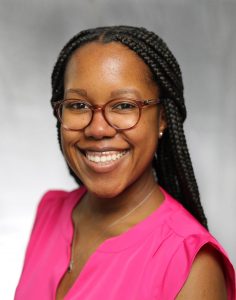 2022 Wright State graduate Kayla Patterson is pursuing her passion for education as an academic coach at Columbus Promise.

Wright State University alumna Kayla Patterson has loved school for as long as she could remember.

Patterson, who graduated in December with a master’s degree in student affairs in higher education administration (SAHE), always prided herself on being a good student. In fact, she enjoyed school so much, that even when she wasn’t taking classes, she used to “play school.”

“I used to force my teenage cousins to play with me, and I, of course, was the teacher,” she said. “It didn’t matter that they were 10 years older than me and had better things to do with their summer afternoons.”

Fortunately, her cousins humored her, she said, letting her, “boss them around,” doing the homework assignments and even reading aloud to her classroom of stuffed animals.

Though she just wasn’t sure which subject or grade she wanted to teach, Patterson said that by the third grade, she knew being a teacher was what she wanted to do with her life. As she went through school, she began to have an affinity for math and English. However, by high school, the subject matter and teachers who really inspired her were in her English classes.

After receiving a bachelor’s degree in adolescent young adult education–integrated language arts from Bowling Green State University, she accepted a teaching position and was “so eager for school to start in August.”

Patterson spent the next seven years as an English teacher and loved it but eventually decided that it was time for a new challenge. She decided to go back to college to earn a master’s degree, choosing Wright State.

She said that being in graduate school was what led her to the next phase in her career as an educator.

“The Ohio College Personnel Association hosts a conference, and the SAHE department pays the registration costs for students in the Student Affairs Graduate Association (SAGA). As a SAGA member, I attended the two-day conference in February of this year,” she said. “On the last day of the conference, I stopped by the Columbus State table and talked to one of the HR representatives. She told me an academic coach position for Columbus Promise would be posted in a few days and encouraged me to apply.”

Patterson began at Columbus Promise in June as an academic coach. The program, which is in its first year, covers tuition and fees after the Pell grant and any tuition-restricted scholarships, as well as an additional $500 per semester for educational expenses, for Columbus City Schools graduates, for up to six semesters at Columbus State Community College.

As an academic coach, Patterson teaches students in the program to develop and strengthen the skills needed to succeed in the classroom by hosting workshops and leading study groups. She also holds individual appointments with students to talk about things like time management, note-taking strategies, tips for staying organized, how to read a syllabus and navigating Blackboard.

“These are skills that aren’t often taught to students, especially those who are the first in their family to go to college,” she said

While she is excited to be in a new career, and grateful to Wright State’s SAHE program for helping to make it possible, Patterson said deciding to leave K-12 education wasn’t easy.

“Teaching (in K-12) was such a big part of my identity, and I’m still coming to terms with the fact that I no longer have the job I thought I would have for the rest of my life,” she said. “But I wanted to explore other career paths and that’s OK.”