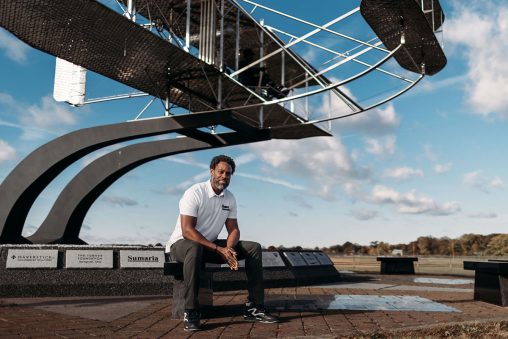 It was difficult for Onome Scott-Emuakpor, Ph.D., to see himself doing anything other than playing basketball or drawing. Both were his favorite activities growing up.

A heavily recruited basketball player from East Lansing, Michigan, he chose Wright State University because his sister attended the institution and its proximity to his hometown. He also appreciated the professor-student relationship.

“I visited the campus and saw how close students were to professors,” he said. “The classroom rosters were small so professors had more time to engage with their students.”

When Scott-Emuakpor applied for admission into Wright State, he listed fine arts as his major. However, his father had other ideas.

“He told me I should major in engineering,” Scott-Emuakpor said. “My father was a medical doctor who had become successful by making good decisions in his life. So, I was not going to argue with his suggestion.”

It was a wise choice.

Scott-Emuakpor admits that he did not know what an engineer did when he listed it as his major. He acquired a passion for the field while learning concepts at Wright State and subsequently applying them to real-world challenges. He graduated from Wright State in 2002 with a bachelor’s degree in mechanical engineering.

Years after heeding his father’s advice, he has attained success in his own right. Scott-Emuakpor, who has 17 years of experience as an aerospace research engineer, is highly regarded in his field.

A member of the Wright State men’s basketball team from 1997 to 2000, he began his career as an aerospace research engineer at the Air Force Research Laboratory Aerospace Systems Directorate at Wright-Patterson Air Force Base.

In his role as a turbine engine integrity technical lead, Scott-Emuakpor developed an energy-based critical fatigue life prediction method that led to a greater understanding of fatigue characterization in gas turbine engines. He also contributed to advancing small-scale propulsion and supersonic turbine engines for long-range applications. His work investigated solutions to improve the sustainability and life cycle management of legacy turbine engines.

While much of his work has been technically focused in a research lab, Scott-Emuakpor has a slightly unique perspective as founder of Hyphen Innovations. The entrepreneurial opportunity program at Wright-Patterson Air Force Base was the catalyst for establishing his own business.

“It is a difficult transition because you must respect both the business and technology perspective. Funds are required to work on various applications,” he said. “I talked to CEOs and experts at the Entrepreneur’s Center in Dayton before making the leap. I must be innovative and stay ahead of the curve to be successful and generate revenue.”

The Wright State graduate is accomplishing this by being creative.

“I want to be crazy enough to try any combination of advanced technology in aerospace systems especially as it relates to turbine engines. My goal is to develop ideas that push the threshold of what people think is appropriate,” he said. “I am the guy who said keep trying until you figure it out. That is the approach I take toward these things.

“I own a small business,” he continued. “So, there is not any red tape to cut through and I can get things done much quicker.” 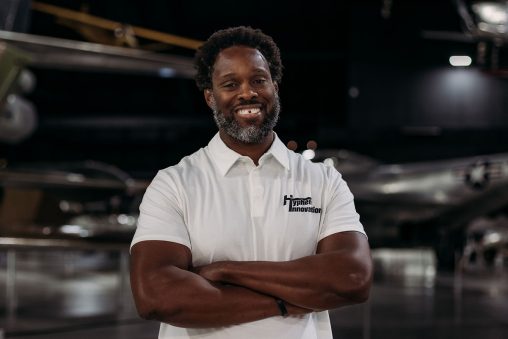 As a student and member of the men’s basketball team, Onome Scott-Emuakpor acquired a passion for mechanical engineering while learning concepts at Wright State and subsequently applying them to real-world challenges.

Scott-Emuakpor garnered recognition in short order. He was selected as a 2013 recipient of the Presidential Early Career Award for Scientists and Engineers (PECASE), the highest honor bestowed by the president and the U.S. government on science and engineering professionals in the early stages of their independent research careers.

The Dayton resident was also honored as The Most Promising Scientist in Government at the 2015 Science, Technology, Engineering and Mathematics (STEM) Black Engineer of the Year Awards Conference. He was a recipient of the AFRL Early Career Award in 2017 and his contributions have been recognized by the Aerospace System Directorate and the Air Force Research Laboratory.

He is quick to acknowledge mentors he benefited from while in college. Scott-Emuakpor said relationships with instructors, boosters and other mentors led to internship opportunities that were catalysts for career success.

Scott-Emuakpor, who also earned a master’s degree and Ph.D. in mechanical engineering from The Ohio State University, said an advisor urged him to attend graduate school, where he acquired even more knowledge of the field. He wants to be a mentor for young people, African Americans and women.

“You need to have a curious mind to become an engineer — everything else will take care of itself. I was fortunate to have opportunities presented to me and made the most of it,” he said. “I would like to return the favor and serve in the role that my father did for me.”