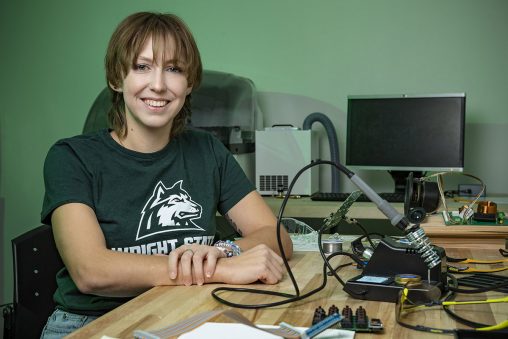 Wright State computer engineering major Celeste Irwin wants to use her medical and programming knowledge to work in research and product development in MRI-guided focused ultrasound.

The $5,000 scholarship, which is offered through a partnership with BHG Financial and the Society of Women Engineers, covers tuition costs and provides Celeste with industry networking and job shadowing opportunities at BHG, interview preparation and career advice from other women in STEM-focused roles.

Prior to deciding to go back to college, Irwin worked in vascular ultrasound in a hospital for five years. She said that even though she enjoyed her career, the demands on her physical and mental well-being became too much.

“I was good at my job and enjoyed the patient care aspect of it,” she said. “What many people don’t know is that ultrasound is a profession that causes a lot of injuries. The most common is a rotator cuff tear. I’ve had two minor rotator cuff injuries, and after a while decided it wasn’t a long-term sustainable career for me.”

Irwin works at the University of Dayton Research Institute as an associate software technician while she takes classes at Wright State. She hopes to eventually combine her medical and programming knowledge to work in research and product development for a technology called MRI-guided focused ultrasound.

MRI-focused ultrasound is a noninvasive, non-surgical procedure that involves high-intensity focused ultrasound — focused beams of acoustic energy — to heat and destroy a small, targeted area of tissue without harming adjacent tissues. This form of treatment provides a less damaging and invasive way to treat both benign and malignant tumors and some tremor disorders such as Parkinson’s disease and essential tremor and can be performed while the patient is awake.

Irwin said that the path has not been an easy one. Even today, STEM careers are seen as male-dominated fields. Though she recognizes that things are constantly changing, she felt she came into STEM in high school and college at a disadvantage because she was not encouraged to participate early on.

However, her love of STEM and desire to challenge those perceptions drove her to succeed.

“There were times that I would be the only woman in the class or one of two. It’s a different social dynamic than in a gender-neutral or female-dominated field,” she said. “Being able to be a part of the visibility of women in STEM is very important me. I want to be a role model not just for girls but for people in general and to live in a way that people can look up to.”

She encourages girls and women to explore STEM fields and not allow others to tell them where their potential lies.

“Don’t let people tell you what you can and can’t do. You know better than they do what your strengths are and what you are capable of,” Irwin said. “Make sure to utilize your social supports. Interacting with people that have shared experiences can make you realize that this is something that is common and you can do it because they did it too.”