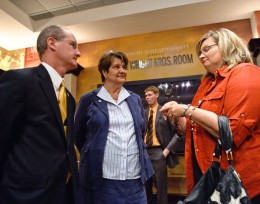 From left to right, State Sens. Bill Beagle, Peggy Lehner and Shannon Jones following a July 18 news conference at Wright State to announce an $11.4 million initiative to develop aerospace-related programs and create jobs. The senators were instrumental in helping secure state funding for the initiative.

Sony, Google, Nintendo, Citigroup, Lockheed Martin. This group has more in common than just being all-star corporations–they were all recent targets of cyber attacks.

Hacking appears to be expanding well beyond military and governmental units, threatening the computer networks of corporations, electric utilities, oil refineries and banks. The growing number of attacks on our cyber networks has become, in President Obama’s words, “one of the most serious economic and national security threats our nation faces.”

“It is a very complex environment; it is a very changing environment,” said Vikram Sethi, Ph.D., director of the institute. “We have to continuously evolve from reacting to existing threats to learning about new techniques and footprints as well as what motivates the intruders. Our new programs will help provide the right mix of theory, application and industry credentials for cyber security professionals.”

Local observers told the Dayton Daily News that a five-year-long cyber attack against American companies, state governments and the United Nations should be a wake-up call for Dayton and its mix of government and private employers. Dubbed “Operation Shady RAT,” the attack was aimed at more than 70 targets, according to computer security firm McAfee Inc.

The institute will offer a six-month Cyber Security Certificate program and a 12-month postgraduate program beginning in January. Each program will use a blended education model where students will come to the Dayton campus for limited weekend residency periods followed by online learning. A total of 60 students will be selected.

Additionally, a Master’s Program in Cyber Security is being jointly developed by Wright State’s College of Engineering and Computer Science and the School of Professional Psychology.

The new programs are the latest example of Wright State’s leadership in supporting Ohio’s defense-related workforce.

In July, the university announced that the Wright State Research Institute, through its Defense Aerospace Graduate Studies Institute, will work with its sister institutions of higher education to develop aerospace-related programs and professional certifications that better align workforce development and research and technology commercialization with job creation and economic development.

This economic-development initiative led by the research institute will be funded by $11.4 million contained in the biennial budget signed by Gov. John Kasich. The funding was largely the result of efforts by State Sens. Chris Widener, Shannon Jones, Peggy Lehner and Bill Beagle.

“This effort never would have happened without the support of these four senators, who know how crucial it is to provide the resources that will grow jobs for Dayton, the region and the state,” said Wright State President David R. Hopkins.

Ryan Fendley, director of the Wright State Research Institute, said the effort will involve members of the institute-led Human Performance Consortium, which consists of a number of area defense-related companies and other institutions with a variety of skills and resources.

“We were the natural choice for the legislative delegation,” Fendley said. “The senators felt we were in the strongest position to provide the necessary leadership to get this done.”

Beagle said the state needs to attack the jobs problem on all fronts and that funding the economic-development initiative is one way to do that.

“This will help train people for important work that is vital for government and other employers,” Beagle said. “We need to make sure we have the work force necessary for our employers so they don’t have to go to other states looking for people.” 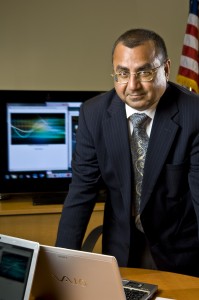 Vikram Sethi, Ph.D., director of Wright State University’s Institute of Defense Studies and Education, says the number of cyber attacks on government and private installations are increasing in both frequency and sophistication.

Wright State is a well-established leader in developing and offering programs that meet the region’s aerospace and defense needs. The university conducts a broad base of related research that leads to commercialization and produces a pipeline rich with talent to feed Wright-Patterson Air Force Base and defense-related businesses.

In addition to the cyber security program, several new Wright State programs are tailored to educating and updating workers on important and pressing issues, some of them related to national security.

The Institute of Defense Studies and Education is also offering a related certificate program designed to provide the skills to thwart cyber assaults that succeed due to computer code that is not secure.

An executive workshop on the Psychology of Terrorism is another offering by the defense studies institute. The workshop, which was held last year and is scheduled again for this fall, targets military and intelligence officers.

“The workshop helps the officers understand the intentions of terrorists and how to better protect against them,” Sethi said.

The institute also has a nationally recognized program titled Executive Certificate in Integrated Supply Chain Management. The program is aimed at people responsible for the design and execution of supply chains for the government. It attracts 80 students annually, each with a leadership role in supply chain operations that includes transport, depot, and maintenance.

Sethi said the program–which is designed to increase efficiencies, improve execution and save money–broadens expertise. Said one person in the program: “I came in as a transporter and went back as a supply person.”

The mission of the institute of defense studies, which is three years old, is to develop educational and research programs to support the Defense Department and others by employing experts from government, the military, academia and the private sector.

“We have grown dramatically by understanding what the needs of the Defense Department and Air Force are,” Sethi said. “And we have become far more proactive. The programs are really attuned to what these people are facing today.”