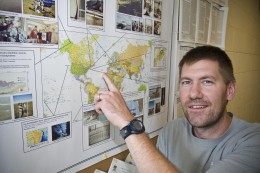 Hammerschmidt and his researchers have been working on the project for the past three years, funded by three grants from the National Science Foundation totaling about $400,000.

Inside three freezers in a Wright State University lab is the bottom of the ocean.

More than 1,000 samples of seawater, ocean sediments and zooplankton—tiny ocean organisms—are preserved there. They are the fruit of Wright State oceanography research cruises investigating the source of mercury in seafood.

“These cruises were the most comprehensive mercury bio-geochemistry studies ever conducted in a marine environment because they included air sampling, water sampling, sediment sampling and biological sampling,” said Chad Hammerschmidt, Ph.D., associate professor of earth and environmental sciences. “What we’re finding is that the sediments are a very significant source of methylmercury on the continental shelf.”

Most of the mercury in the environment is from human sources–half of it from the burning of coal. Once mercury falls into the ocean with rain, bacteria can transform it into methylmercury, the form that can accumulate in fish. Nearly all of mercury in humans comes from the consumption of marine fish.

It has been estimated that about 6 percent of women in the United States of childbearing age have blood methylmercury levels that are potentially harmful to their unborn children.

“That’s millions of young women it could potentially affect,” Hammerschmidt said. “We’re trying to figure how that methylmercury is being made, where it is coming from, and how it is getting into the food web.” 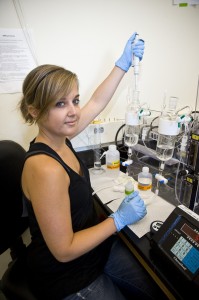 Katlin Bowman, a Wright State student from Columbiana, Ohio, who is working on her master’s degree in earth and environmental sciences and hoping to enroll in a Ph.D. program, wants a career in research oceanography. She has been on four of the cruises.

If it is determined that the methylmercury in marine fish is from man-made sources, Hammerschmidt says, then coal emissions could be reduced and/or warning labels placed on seafood products.

Hammerschmidt and his researchers have been working on the project for the past three years, funded by three grants from the National Science Foundation totaling about $400,000. In addition to the funding, the grants also provide for the use of the research ships: the Oceanus, the Endeavor and the larger Knorr, which carries about 30 scientists and costs about $50,000 a day to operate.

Last July, the researchers sampled sediments off the east coast of the United States. Those samples will be used to investigate what environmental factors affect methylmercury production in sediments, how it’s distributed on the continental shelf and slope and what controls how much accumulates in zooplankton.

Collecting sediments from the continental shelf is crucial because that area is important to U.S. coastal fisheries, which account for about 90 percent of fish production in the marine environment.

Hammerschmidt said collecting sediments two miles down from the surface is challenging. A large box corer is dropped from the ship and lowered by wire to the sea bottom. The corer then scoops up the sediment and is hoisted back up to the ship. The sediment cores are subcored, and the mercury analyzed.

“There were days when we would only sleep for about two hours,” Hammerschmidt recalled. “We would work almost around the clock.”

The results should enable the researchers to see both the horizontal and vertical distribution of methylmercury across the Atlantic, the location of the highest concentrations and the areas where it is most likely being produced.

The researchers must take special care not to contaminate the seawater samples because the mercury is in extremely low concentrations. So the equipment they use is made entirely out of plastic or plastic-coated metal so it can be easily cleaned. The wire used to lower sampling bottles is made of Kevlar so that metal doesn’t contaminate the water.

“Working on a metal ship is very challenging because there’s metal everywhere, which means there is mercury everywhere,” Hammerschmidt said. “Even paint chips have mercury in them.”

Katlin Bowman, a Wright State student from Columbiana, Ohio, who is working on her master’s degree in earth and environmental sciences and hoping to enroll in a Ph.D. program, wants a career in research oceanography. She has been on four of the cruises.

“It’s a really unique experience to learn how to do everything in the lab, and then bring everything to sea and it’s totally different,” Bowman said. “Your laboratory is moving, and you’re dealing with all of these different elements. It’s challenging, but totally rewarding too.”

The cruises also include oceanographic students from other institutions.

“Participating in these cruises allows them to become immersed in oceanography, not only with senior scientists but other students who are sharing the experience and really learning firsthand about chemical oceanography,” Hammerschmidt said.