Editor’s note: This is the first of four stories in the weekly “Opening Doors” series about Wright State programs that provide laboratory research and training opportunities in the biomedical sciences for students of underrepresented minorities. The programs are directed by the Boonshoft School of Medicine’s Department of Pharmacology and Toxicology. 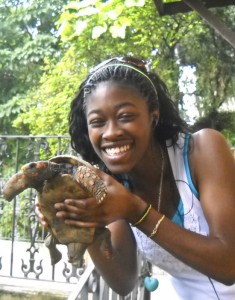 With parents from Ghana who had lived in Canada and Pennsylvania before settling in Clayton, Amma Boakye had an itch to travel that she did not think she could scratch by attending nearby Wright State University.

“I had my heart set on going out of state, but that’s pretty expensive,” she said.

But choosing the local option is helping Boakye go far—geographically as well as academically.

At Wright State, Boakye also discovered a program that could satisfy her wanderlust while meeting her academic needs. It was Translational Biomedical Training for Underrepresented Minorities, a research apprenticeship program in which U.S. and Brazilian students spend time in each other’s countries.

“On a whim, through all those emails you get here, I thought, ‘I’m going to open this Biology Club one. Maybe there’s something interesting going on,’ ” she said.

It turned out to be an announcement about the program.

Wright State, Boakye learned, is a partner in an innovative program that offers participants hands-on exposure to biomedical research in Brazil. The students pay tuition at their home institutions and receive academic credit for their lab experience. They also receive financial support for housing and travel.

“Fewer than 4 percent of minority students in the United States participate in foreign exchange programs,” said Morris, Distinguished Professor of Research, chair of the Department of Pharmacology and Toxicology and assistant vice president for graduate programs at Wright State. “This program makes it possible for more underrepresented students to study abroad, while focusing on diseases such as cardiovascular disease and diabetes that lead to health disparities in both the United States and Brazil.”

The program’s ultimate goal is to encourage students from population groups that are underrepresented in biomedical sciences, such as African Americans, first generation college students or students with disabilities, to pursue high-level careers in that field.

“I really wanted to study abroad, but usually you don’t get to study abroad if you’re a science major,” Boakye said. The courses available generally don’t match what science majors need, and their requirements offer little leeway for electives. “I thought this would be a once-in-a-lifetime opportunity, where it’s actually a science program.”

Besides the allure of going abroad, the program offered a rare chance for Boakye, then a sophomore, to get real laboratory experience—something that would help her chances for gaining acceptance to a medical school. “At first I thought we were just going to take classes. But it is a research-based program. I got to work with grad students. Being a sophomore and just walking into a lab like that, that’s pretty unheard of,” she said.

Boakye, who is African American, signed up immediately. “Three weeks later, I was gone. It happened really fast,” she said.

In 2011, Boakye’s group spent three months—March to June—in Sao Paulo, where they worked on research projects directed by Mackenzie Presbyterian University faculty. The Americans lived separately in local residences, an arrangement that immersed them in the local culture.

To Boakye, working in a lab was as novel as living in a foreign country, but she said her lab partners made her feel at home. “They definitely went out of their way to make me feel welcome. My lab teaching assistant was amazing. She showed me around, took me to her house, and we had cookouts. It was great. I felt like I almost became a part of her family,” she said.

Boakye worked on a neuroscience project that used laboratory rats to study epilepsy. She said the experience gave her a chance to see her classroom lessons at work, and she acquired lab skills that have been useful to her back at Wright State.

Boakye said her visit didn’t go without a hitch—she had a dispute over rent money with her Brazilian roommates—but she said she enjoyed the experience and wished she could have stayed longer.

“When you go abroad you change a lot, even though you might not realize it at the moment. You learn a little more about yourself because you see everybody else’s way of thinking and how they behave and act, and you get to compare it to what’s going on at home,” she said.

Boakye also discovered how research suited her. “I found out about myself that research for me is like running,” she said. “I don’t always like the process. But at the end, it’s like a runner’s high. You feel like you really accomplished something.”

The Department of Education’s Fund for the Improvement of Postsecondary Education (FIPSE) provides grants to support innovative educational reform projects that can serve as national models for improving the quality of postsecondary education and increasing student access.  One of these programs is the Translational Biomedical Training for Underrepresented Minorities. The program is open to undergraduate and graduate students. It encourages underrepresented minorities to apply. To qualify, students must be U.S. citizens or permanent residents, must be in good standing with one of the U.S. partner schools, and must have completed at least one quarter or semester of Portuguese language training.

Next week: BioSTAR steers an undergraduate toward a research career.