STREAMS carries Wright State student on a voyage to science

Editor’s note: This is the third of four stories in the “Opening Doors” series about Wright State programs that provide laboratory research and training opportunities in the biomedical sciences for students of underrepresented minorities. The programs are directed by the Boonshoft School of Medicine’s Department of Pharmacology and Toxicology. 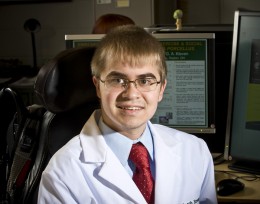 STREAMS gave Jacob Brewer the opportunity to do graduate-level lab research with a faculty mentor, travel to conferences and give presentations about his work. It also provided a stipend, campus housing, travel expenses and six hours of Wright State academic credit.

As a high school student in Columbus, Ohio, Jacob Brewer did not see himself as a scientist.

He said some teachers even discouraged the notion, doubting he could do laboratory research because of his need to use a wheelchair.

“Once I came to Wright State, it was actually the opposite,” said Brewer, now a senior majoring in psychology with a concentration in behavioral neuroscience. His advisors “kept pushing, pushing, pushing me to try new things, not to limit myself by my disability. As I started taking more classes and mixing with more groups of people, it hit me that I had a strong interest in science.”

The key that unlocked Brewer’s passion for science was a program called STREAMS, or Short-Term Training Program to Increase Diversity in Health-Related Research. Funded by the National Heart, Lung, and Blood Institute of the National Institutes of Health (NIH), STREAMS encourages members of underrepresented minority groups and students with disabilities to choose careers in biomedical sciences.

STREAMS is one of four funded training programs for students of underrepresented minorities directed by Wright State’s Department of Pharmacology and Toxicology in the Boonshoft School of Medicine. The program draws students from across the United States. Over 18 years, approximately 175 students—12 to 14 each year—have participated in it. Faculty mentors come from the Boonshoft School of Medicine, College of Science and Mathematics, and College of Engineering and Computer Science.

Brewer learned about the summer program during his freshman year in a casual conversation with another student who had participated in STREAMS. It changed his game plan. STREAMS gave Brewer the opportunity to do graduate-level lab research with a faculty mentor, travel to conferences and give presentations about his work. It also provided a stipend, campus housing, travel expenses and six hours of Wright State academic credit.

The program enabled Brewer to conduct important topical research, work that could be published.  He worked with Gale Kleven, Ph.D., assistant professor of psychology, studying the evolution of behavior in a strain of guinea pigs. He has presented the results of his research at several conferences and is using it as the subject of his honors thesis and a publication.

Besides research, STREAMS students participate in a summer-long journal club in which the students must present their own work and critique one another’s. At the end of the program they present their work in a research symposium for the Wright State community. In the meantime, they study research ethics, animal use and care, and laboratory safety—subjects that undergraduates seldom get. They also take part in a new online interactive course, Frontiers in Translational Research, which includes schools in North Carolina and Brazil. And, they take a field trip to the Procter & Gamble Research Center near Cincinnati for a real-world look at biomedical research.

The result is better preparation for an advanced degree program, and a better chance of getting accepted to quality programs. “By the time they get done with their nine weeks of STREAMS, they have a very good, broad-based understanding and training in general research principles and practices that most undergraduates, even if they’re working in labs, don’t get,” said Valerie Neff, Ph.D., assistant director of the STREAMS program. “It’s very impressive for a student to have on their resume.”

Brewer successfully reapplied for the program each summer, becoming only the second three-time student in the program’s history. It has given him a good chance to find out if lab research is something he would want to do for a career. “I really enjoy it. I’m still working in the lab on a volunteer basis,” he said. “That’s the really nice thing about the STREAMS program. Sometimes it sets you up with opportunities to continue doing research and getting really good experience.”

Brewer came to Wright State with the idea of a career in clinical psychology. He said STREAMS “wasn’t necessarily a program that I thought would apply to me.” But through it he learned about other aspects of psychology and discovered his passion for neuroscience—and for sharing what he learns.

“I would really enjoy lab research, but I would also enjoy teaching at a university. I’ve always had a passion for sharing information and ideas. I think that would really be a perfect fit for me, because I would do two things that I enjoy,” he said.

STREAMS is the oldest of Wright State’s four funded training programs. It is open to students from around the United States, and about 85 percent of the students who have been in STREAMS are from other universities, according to Mariana Morris, Ph.D., Distinguished Professor of Research; chair, Department of Pharmacology and Toxicology, and assistant vice president for graduate programs. Morris co-directs the program with Cameron Chumlea, Ph.D., executive director of the Lifespan Health Research Center and Fels Professor, Departments of Community Health and Pediatrics. Valerie Neff, Ph.D., Pharmacology and Toxicology research associate, is the new administrator of the program.

To be eligible, a student must be a U.S. citizen or permanent resident who has successfully completed one year at an accredited school or university. The student must also be a member of an underrepresented racial or ethnic group, have a disability or come from a disadvantaged background.

“STREAMS has benefited me in lots of ways,” Brewer said. “It’s gotten me involved in research that I love and provided the impetus for me to attend graduate school in neurosciences. It’s given me skills that are going to benefit me in graduate school, and it’s given me a lot of opportunities to connect with people. I think it’s pretty much responsible for just about everything that I’ve achieved thus far.”

Next week: A mother’s affliction motivates a woman to participate in Wright State’s GRAD-PREP program.