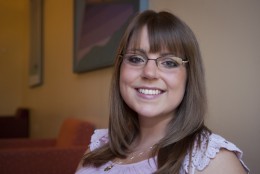 Jessica Lane credits her success largely to the motivation instilled in her by her foster grandmother.

She spent 10 years in foster care. Her father died when she was 13. She lived in a rented room and with friends during her senior year of high school, which was a blur of classes, homework, drill-team practices and late-night waitressing.

Jessica Lane’s road to Wright State University was a bumpy one.

But today, the bubbly, irrepressible Lane has a bachelor’s degree in psychology, a job at Kettering Medical Center and is training her sights on earning a Ph.D.

“Wright State helped me achieve so much,” Lane said.

Lane got an early life lesson in independence.

A divorce and custody battle between her parents sent the 3-year-old Lane and her 1-year-old sister, Rachel, to a series of foster homes. Three years later, the two landed in a foster home on a farm in New Paris, Ohio, 40 miles northwest of her Dayton home.

Lane called it “the middle of nowhere,” but flourished in what was a caring environment created by her “foster grandmother” that gave her responsibility and security.

“We had horses, cows, goats, dogs, cats, and we took care of them all,” Lane recalled. “There was not a day during the summer that she didn’t have us out doing something. I learned a lot about taking care of the farm.”

When Lane’s father died after a bout with lung and liver cancer, the 13-year-old Lane and her sister moved to Xenia to live with their mother, who worked various restaurant and other jobs to support the family.

At 15, Lane started mowing lawns and doing odd jobs to earn money. When she was 17, she began working at a fast-food restaurant and also landed an internship at a computer software company.

“It was a great way for me to get my feet wet in the professional world,” Lane said. “It was actually what made me decide that I really, really needed to go to college and do something like this.”

Two weeks into her senior year at Xenia High School—at age 18—Lane moved out of her mother’s home.

“We really didn’t know each other very well, I guess,” Lane said. “I’d grown apart from her. I had 10 years away from her.”

Lane moved in with the family of her color guard instructor, paying $50 a month to rent a spare bedroom. She later lived with friends.

The school year was a blur.

Up at 6 a.m., at school by 7:30 a.m., drill-team practice after school until 5 p.m., four hours of waitressing, then homework until midnight or later.

“I can’t even describe to you the number of times I was sitting home thinking, ‘Oh, God. I’m not going to be able to get all of this homework done. I’m so tired. I just want to go to sleep. I can’t do it,’” she said. “Then there would be the times when I’d say, ‘No. I’ve got this. I can do this.’”

Lane’s hopes of going to college had died. She couldn’t afford it—or so she thought.

The mother of one of Lane’s friends encouraged her to apply for scholarships and took her to financial aid meetings with college representatives.

A meeting with a Wright State official coupled with letters of support from her high school teachers resulted in her being accepted at Wright State as an independent student because of her family situation. A generous financial aid package was included.

“I was so elated,” she said. “It was so exciting to know I could go to college.”

Graduating in the top third of her high school class, Lane would be the first member of her family to attend college.

She initially majored in nursing, but switched to psychology after realizing she was more interested in the psychology side of caring for patients.

Lecturer Patricia Schiml, Ph.D., said Lane really shined in her human behavioral endocrinology capstone class. Lane’s final paper and presentation dealt with how the stressors of foster care can impact hormonal and neural function in such a way that the children are more prone to depression as adults.

“I know that Jessica’s childhood experiences contributed to her choice of a topic, and I think it’s wonderful when a student can see how science relates to their life in personal fashion,” Schiml said. “It’s that ‘catch’ that I hope all students experience at some point when engaging in scientific discovery.”

Besides typically carrying 16 credit hours, Lane worked up to 40 hours a week—both as a dietary aide at Kettering Medical Center and at the campus art gallery, where she set up and took down exhibits. She graduated with a 3.3 GPA and as a member of Psi Chi, the international psychology honors society.

Lane would like to go to graduate school and earn her Ph.D. in psychology or social work. She is currently working at Kettering—where she was named Employee of the Month for August—and is on the lookout for internships.

Lane credits her success largely to the motivation instilled in her by her foster grandmother.

“She was a wonderful influence in my life,” Lane said. “The biggest thing is she was so persistent. She just kept after me.”