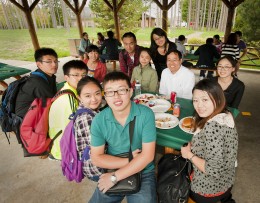 Wright State University and the Dalian Institute of Science and Technology celebrated the first annual Wright State/Dalian Fall Barbecue at the Village Pavilion picnic shelter Sept. 14 in recognition of their successful collaboration.

Wright State’s strengthening relationship with China will be visible on campus this week when students, faculty and administrators from two Chinese universities come calling.

Representatives from Xi’an University of Arts and Science and the Dalian Institute of Science and Technology will spend several days at Wright State beginning Sept. 26.

“It’s all part of our efforts to further internationalize our campus,” said Stephen Foster, associate vice president for international affairs. “We hope to bring in more students from very different parts of China. China, clearly, is very important as a source of university partners and as an academic interest.”

Dalian Institute of Science and Technology is sending a delegation of 10 students and several faculty and administrators to become familiar with the Wright State campus and to meet faculty and staff. These students will likely attend Wright State next year.

Wright State has been a partner with the Dalian Institute of Science and Technology for many years. Many of their students have completed degrees in engineering and business. About 100 students from Dalian have enrolled at Wright State in previous years.

This will be the first visit to Wright State of a major delegation from Xi’an, the site of early Chinese dynasties in central China. It follows two visits to Xi’an by Wright State officials earlier this year.

The Xi’an group will be exploring degree-completion programs at Wright State, including 2+2 and 3+2 programs that have Chinese students completing the first years at their home institution and the later years at Wright State, obtaining degrees from both universities. The program could be in place by the fall of 2013.

Members of the delegation will be meeting with Wright State officials at the College of Engineering and Computer Science, Raj Soin College of Business, College of Liberal Arts and College of Science and Mathematics. If degree programs at all four colleges are established, it would mark a significant expansion of the Wright State-China programs from engineering and business into other colleges and academic programs.

In a related development, Wright State is proposing to establish a new campus at Dalian that would offer a four-year engineering degree to Chinese students.

“This is going to be a campus that’s focused on serving Chinese students with disabilities,” Foster said.