Students are packed into a classroom in Russ Engineering. A symphony of foreign languages bounces off the walls.

Some photos of previous partners flash on a screen. And then couples who partnered up last semester discuss their experiences. 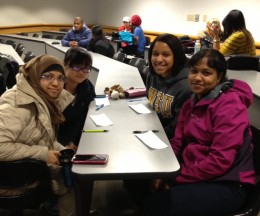 Then it comes time to pair up. Students are introduced to their partners and spend a few minutes getting to know each other before scheduling what will be weekly meetings of up to an hour. Backgrounds can be jarringly different. A female student who grew up in Nebraska, for example, is paired with one from Kuwait.

“With the changing racial and ethnic composition of America, students can no longer afford to live in their own isolated worlds,” said Shreya Surendramal Bhandari, Ph.D., who along with Jeannette Horwitz, director of the LEAP Intensive English Program, helped start the Conversations Partnership Project in 2010. “This is a perfect opportunity to learn about a foreign culture.”

The project includes students of Multicultural Competence, a general education class within the social work department, and those in the LEAP program of the English department. Students in both courses must complete weekly written assignments related to their meetings and receive a grade.

Most of the international students in the program are from Saudi Arabia and China. There is an attempt to honor student requests to be matched up with someone of a certain country or a specific gender. Otherwise, it’s random.

At the beginning of fall semester, Torrey Furr, a liberal arts major from Wooster, Ohio, was paired up with Naif Alobilan, a Saudi master’s student majoring in biomedical engineering.

Alobilan said he would come into contact with American students during classes, but it was difficult to strike up friendships with them because they knew each other and tended to group together.

Furr said she was a little nervous about taking part in the partnership program because she had never done anything like it before.

“It actually turned into a really cool friendship, where we were able to grow off of each other and learn more about each other’s culture,” she said. “Some things are different, but it’s a good different.”

Wulber was surprised that coming from a tiny rural town in the Midwest, she had many things in common with Al-Yacoub, including the importance of family.

Al-Yacoub said his previous knowledge of America came from the American food he ate and the American television he watched in Saudi Arabia.

“What was surprising is that we had this image that all of America is like Beverly Hills. Everybody’s rich,” he said.

Al-Yacoub was pleasantly surprised to learn that most Americans are like the Saudis in that they both come from a range of socioeconomic backgrounds.

Horwitz said the project, which has grown to about 80 students, is a way for American students to meet their international counterparts, help them with their English and break down stereotypes they may have had. For the international students, she said, it’s a way to learn more about college life and American culture and make friends.

“In order to know a culture, you need to know people from it,” said Al-Yacoub. “It has been a really rich experience in that matter.”