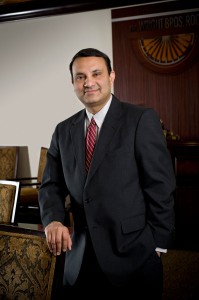 Sundaram Narayanan, the dean of the College of Engineering and Computer Science who helped create and lead the Wright State Research Institute, has been named provost of Wright State University.

Narayanan, Ph.D., P.E., will assume his duties as the university’s chief operating officer and chief academic officer on March 18.

“I view it not as a position of authority, but one of responsibility,” said Narayanan. “My challenge is to ensure that we continue to foster an environment of innovation that allows students, faculty, staff and alumni to be successful in the 21st century.”

A first-generation college student from India, Narayanan obtained his master’s degree from the University of Alabama and doctoral degree from the Georgia Institute of Technology in industrial and systems engineering.

“Dr. Narayanan has a tremendous ability to see how everything fits together,” said Wright State President David R. Hopkins, who announced the appointment today. “In the 18 years he has been at the university, he has proven to be an outstanding teacher, an excellent scholar, a great department chair and a highly successful dean. While the campus genuinely respects and admires his distinguished career, it is what he will help to lead us to do in the future that has our faculty, staff and students truly excited.”

Narayanan’s leadership philosophy is to recruit and retain top talent, give them the tools and resources to succeed, and then get out of their way. “The people we have at Wright State set ambitious goals and endeavor to make them happen. My job is to remove the barriers to their success,” he said.

“Increasingly, we are being recognized for our academic excellence and program distinctiveness, for our ever-growing contributions to economic revitalization and for improving the quality of life in the region,” he said. “The more people that understand the work of our faculty, staff and students, the greater the impact we can have.”

Under Narayanan’s tenure as dean, the engineering and computer science college experienced its highest enrollment in its history; the school’s research funding grew by 67 percent from $9 million in 2009 to $15 million in 2012; and the college created Ohio’s only master’s degree program in cyber security.

Narayanan was also instrumental in creating and directing the Wright State Research Institute, which in five years has grown to more than 75 employees with annual research awards of more than $20 million.

Narayanan says his engineering background has taught him to take a systems approach in decision making.

“It’s the whole notion of seeing the bigger picture, the different elements fitting together,” he said. “You’ve got multiple stakeholders, and you need to have a sense of balance between all of the different stakeholders involved.”

He also believes in empowering people and encouraging them to express their perspectives and opinions.

“Then you want to be able to put them together in a manner that will constantly focus on what is best for them and for the organization,” he said. “I am honored to join Dr. Hopkins and I look forward to continuing to work with his leadership team.”

Narayanan grew up in Bangalore in southern India, well known as a hub for India’s information technology sector. His parents couldn’t afford to go to college, but encouraged Narayanan and his sister to do so.

“The value of education was something that was preached to us,” said Narayanan, who obtained his bachelor’s degree in mechanical engineering at India’s National Institute of Technology.

Narayanan, who plays cricket with Wright State students and competes against teams at other universities, says being a first-generation college student will give him a special perspective as provost.

“Wright State’s mission of providing the opportunity of high-value education to everyone is close to my heart,” he said. “We will strive to help students from all backgrounds come to Wright State and become high achievers.”

Narayanan was named provost following a nationwide search that resulted in six finalists for the position. He succeeds Steven Angle as provost. Angle was named chancellor at the University of Tennessee at Chattanooga last week.

Narayanan and his wife, Viji, reside in Centerville with their three children.