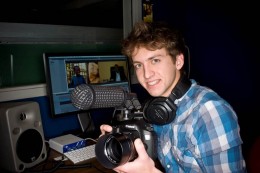 It was just a few short years ago that Wright State University film student Brad Wickham was a high schooler falling in love with the work of movie directors Ingmar Bergman and Fritz Lang. It didn’t take long for Wickham’s interest in filmmaking to rock his world.

Today, Wickham is piecing together documentary footage he shot in Rwanda. The East African nation is still reeling from a 1994 genocidal mass slaughter—triggered by ethnic tensions—that left as many as an estimated 1 million people dead.

Wickham’s documentary will be used to raise public awareness about Rwanda’s recovery effort and spur financial support for it. It comes at a time when Wright State is exploring the possibility of developing relationships and partnerships with Rwanda.

“I see a lot of potential in terms of helping our students with internships, international service learning,” said Kimberly Barrett, Ph.D., vice president for multicultural affairs and community engagement. “Although we emphasize the greater Dayton area, we definitely see the world as our community as well. This is one of those unique opportunities for us to be involved in a very worthwhile and much-needed area.”

Last winter, Wickham was introduced by a family friend to Laurent Muvunyi, a native Rwandan living in Dayton whose brother founded the Association Rwandaise pour le Développement Rural (ARDR), a non-governmental relief organization created to help Rwandans become self-sufficient. Wickham was asked whether he would be interested in going to Rwanda along with local photographers Ken and Kara Hamilton and using his filmmaking skills to document the effort. The trip was the brainchild of ARDR Allies, a U.S. group supporting ARDR’s efforts. http://ardrallies.com/ardr-allies/

Wickham said he was a little fearful and apprehensive at first.

“But they seemed passionate about what they were doing, and it sounded like a good opportunity to use my skills to make a difference and also gain some real-world experience and learn by doing,” he said. “I was very excited about the various landscapes of Rwanda that I knew I obviously can’t get in Ohio. From a photographic or film standpoint, I was very excited about that.”

Muvunyi had been attending college in the Congo during the genocide in Rwanda. When he returned to his native country afterward, houses were filled with dead bodies, children were hospitalized with gunshot wounds and orphans were everywhere. He recalled trying to climb an avocado tree to pick the fruit and stumbling across a human head and a dismembered leg with a shoe still on the foot.

“The situation was really bad,” he said. “I feel like I have to do something.”

Wickham and Hamilton laid out a detailed, day-by-day itinerary and “story-boarded” two weeks’ worth of shoots.

Wickham recalled once taking a break to drink some Cokes and relax by this beautiful lake. The crew later learned that the lake had become a watery graveyard during the genocide, after interviewing a survivor whose sons had been drowned there.

“That was a really shocking contrast,” he said.

Wickham said filming the documentary was fast-paced and arduous. Interviews were conducted from early morning and into the evening hours. He had to lug two cameras, a tripod and a backpack. And all the gear had to continually be loaded and unloaded into and out of a pickup truck.

“There wasn’t a whole lot of time to prep everything, get everything set up, so you had to get things right with the first try. It was definitely a challenge,” he said. “We would go and interview someone who might be in a house without electricity. From a lighting standpoint, that’s very difficult. We had to do a lot of stuff outside as a result.”

After returning to Wright State, Wickham, a sophomore, began the editing process. He estimates he has 10 to 12 hours of footage. Much of it needs to be translated into English. Then the best of the footage must be pieced together in an organized way.

“Some of it is a bit of a blur, and you go back and realize there is some great footage here,” Wickham said.

Wickham’s path to filmmaking began when he was a student at Bellbrook High School.

He and his friends were captivated by films, watching up to two every day. Wickham soaked up Bergman and Jean-Luc Godard, a French-Swiss film director/screenwriter often identified with the 1960s French film movement La Nouvelle Vague, or “New Wave.” Wickham was especially impressed with Lang’s 1931 film M, a German drama-thriller starring Peter Lorre.

“I would call that the most important film for me. It feels very modern,” he said. “I would call it a perfect film.”

Wickham enrolled at Wright State and its motion pictures program because of its strong reputation.

“It’s been great,” he said. “I really can’t speak highly enough of the program.”

Wickham may pursue a career in cinematography in which as part of the filmmaking process he would be the one to select the type of camera lenses, film stock and lighting. He has studied the documentary work of Werner Herzog, a German director whose films often feature heroes with impossible dreams; and Ron Fricke, known for his global non-narrative documentaries that capture people in their everyday environments.

Wickham said his experience in Rwanda opened his eyes about other cultures and gave him a much more international view.

“In America we feel like the way we do things is the way other people should do things,” he said. “So many times over there I was thinking, ‘That’s not how we would do it in America.’ But for them it works out just fine; it works really well.”