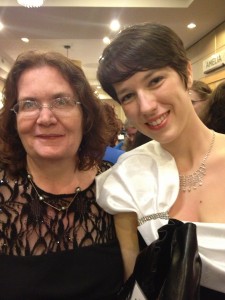 Lara Donnelly, a 2012 Wright State University graduate, is the winner of the Dell Magazine Award for Undergraduate Excellence in Sci Fi and Fantasy Writing.

Donnelly accepted the award March 23 at the International Association for the Fantastic in the Arts academic conference in Orlando, Fla.

Donnelly won the award for her story “To the Dogs,” which will soon be renamed “In the Guts of the Night.” The story is about a young woman who must make some tough decisions about who she is, where she belongs and what she believes about people and herself.

Donnelly had been a finalist for the award for four consecutive years and was in her final year of eligibility.

At the conference, Donnelly gave a reading of her award-winning story as part of a panel. She also received a critique session with Sheila Williams, the editor of Asimov’s Science Fiction, an American magazine that publishes science fiction and fantasy and perpetuates the name of author and biochemist Isaac Asimov.

“It was my fifth and most fantastic conference yet,” Donnelly said. “I met and networked with dozens professionals in my field, made many new friends, reconnected with old ones and had an incredible time.”

The mission of the IAFA is to promote and recognize achievement in the study of the fantastic. The association’s academic conference, in its 34th year, is devoted to all aspects of the fantastic as it appears in literature, film and the other arts.