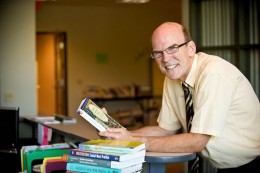 Leo Fugate has a soft spot in his heart for children of single parents. So the former U.S. Army Airborne Ranger has a plan to help them.

Fugate wants to use the knowledge he gains to develop after-school programs for these children of single parents, helping  the kids with schoolwork and trying to keep them off the streets and away from a life of crime.

“To watch children struggle through no fault of their own is really disturbing to me,” Fugate said.

The Greater Miami Valley Masters of Arts in Social Work Program began last fall. Twenty-six students—half at Wright State and half at Miami—enrolled in the inaugural Fall 2012 semester, bringing bachelor’s degrees in social work, nursing, psychology or other social sciences with them.

The professors who teach in the new program shuttle back and forth between the campuses in order to have face-to-face contact with all of the students. Students at the two campuses have group discussions with each other via video.

“It means working with a fine institution like Wright State University and delivering a much-needed master’s in social work program to the Miami Valley,” said William Newsome, director of the Social Work Program at Miami. “We’re thrilled to be working with Wright State.”

One of the students in the master’s program is Ginger Goubeaux, who got her bachelor’s degree in social work from Wright State and currently works as a social worker at Daybreak, an emergency shelter for runaway and homeless teens and young adults in the Dayton area.

“I love working with the teens and young adults,” she said. “A lot of people are intimidated by that population. But the kids are very open and receptive. You can really get down to earth with them.”

Goubeaux believes getting her master’s degree will enable her to advance her already-solid skills.

“It will make me a more effective social worker, both with my clients and my families,” she said. “And I’m hoping it might open more opportunities in the community to advocate on behalf of our clients.”

Courses in the program include “Human Behavior and Social Environment,” in which students learn about life-span development, personality theory from infancy to death and the influence of groups and societal values on people. A policy sequence of courses looks at the history of social welfare and has students analyze a policy such as job creation or health care.

Students must also complete 900 hours of field education over three semesters working with a master’s-level social worker. They are given opportunities to do direct practice with children, families, groups and communities.

For the past six years, students could get a master’s degree in social work from Ohio State by taking the classes at Wright State. The program was overseen by Michel Coconis, Ph.D., assistant professor of social work at Wright State; Tom Gregoire, Ph.D., dean of Ohio State’s College of Social Work; and Denise Bronson, Ph.D., director of the master’s social work program at Ohio State.

The Ohio State program at Wright State was only part-time by design. The new Wright State-Miami program will expand to include a full-time, part-time, and accelerated program for students who have a bachelor’s in social work from an accredited program. These changes will significantly increase the number of students who can receive an master’s in social work in this region.

Brun said many local agencies haven’t been able to fill openings for master’s-degree social workers because there hasn’t been a program specifically for the area up until now. The Dayton VA Medical Center, for example, only hires social workers with master’s degrees.

Kay Kelbley, clinical supervisor for St. Vincent de Paul Dayton, has her master’s in social work. She  oversees 15 social workers who help people get out of homeless shelters, into housing, and then counseling, education and job training.

“I’ve been pushing for a master’s in social work program in our area since the ‘70s,” Kelbley said.

A bachelor’s degree in social work creates graduates who work at a variety of agencies, usually serving as case managers in which they steer clients to the appropriate services such as counseling or financial assistance.

A master’s degree enables social workers to specialize at a particular agency or in a specific area—such as substance-abuse counseling—as well as take on additional management and supervisory responsibilities. They also plan and evaluate programs.

“The professional training provided by an M.S.W. program allows for a more professional level of services, both counseling and case management,” Kelbley said. “That level of training is needed in quite a few fields.”

Newsome said the program will prepare social workers to be better general practitioners, but also to be administrators and agency directors. He said the universities first investigated where the jobs for graduates would be before launching the master’s program.

“It made perfect sense based on that endeavor to ensure that there is a concentration area in gerontology—older adults—as well as children and families,” he said.

Brun said social workers are badly needed these days to help older adults stay in their homes and live independently as long as possible. Social workers go into the home and help do such things as assessments and document the need for health care services and arrange respite for family caregivers.

Brun, who specializes in reducing family violence in our communities, has also written a book about program evaluation and serves as a consultant to help agencies measure the impact of their work.

Newsome, who obtained his Ph.D. from Ohio State, taught at the University of Illinois-Chicago before arriving at Miami in 2005.

Initially, Brun was in an undergraduate program that did not have social work. He transferred to the University of Dayton where he switched majors and received his B.A. in social work.

“Focusing just on psychology to me was ignoring the social implications of why we have problems,” he recalled. “And the social-problems courses I was taking ignored the capacity of people. Social work combined those two for me, and I never stopped.”

Brun went on to get his master’s in social work from the University of Chicago and worked for a private child welfare agency in the city. He later returned to Ohio, obtained his Ph.D. from Ohio State and began teaching at Wright State in 1993.

Social work has its pre-professional roots in helping families and communities through casework and social advocacy for the poor.

The 1935 Social Security Act, which created a government bureaucracy to deliver Social Security, Aid to Families with Dependent Children and other services employed many social workers to assess potential recipients. The 1950s and beyond created private and public agencies to help groups oppressed by discrimination, violence, and inequality as well as persons suffering from health and mental health issues.

In today’s environment, the focus is on helping families through the current tough economic times.

“I believe that we all need assistance at some time,” Brun said. “Most people I’ve worked with were reluctant to receive the help for lots of reasons. And after they’ve gotten the help, they’ve seen the value of it.”