Buried under four inches of soil near a house outside Springfield, Ohio, the quarter-sized button was imprinted with a “1” and an “A.” For Jared Shank, it was a treasure in a metal-detecting history hunt—part of the military uniform of a soldier who served in the 1st Artillery Regiment during the War of 1812.

The unit was at the Battle of New Orleans—the final major battle of the War of 1812—and Fort McHenry, the Baltimore, Md., fort best known for defending the coast against the British Navy and where Francis Scott Key was inspired to write the “Star Spangled Banner.” Shank may have been the first person to touch the button in 200 years.

“Was this button on a guy’s uniform who was at those locations? There is absolutely no way to know,” Shank said, adding that he hopes so. “That’s what it is for me. It’s really a connection with history.” 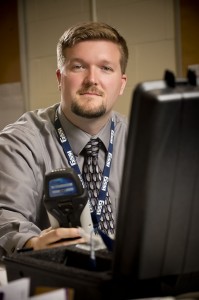 Shank is president of the Dayton Diggers, a 501(c)(3) non-profit group of amateur archaeologists who use metal detectors to recover and document historical artifacts that can be displayed by historical societies as well as perform public services like working with police departments.

And the Wright State University graduate student has turned his love of history and geophysics into a master’s degree thesis project.  He is using magnetics, electromagnetics and ground-penetrating radar to find missing gravestones and graves of military veterans at a Xenia cemetery.

“This is a perfect fit,” Shank said. “Not only is it meeting the geophysics needs of research to look for a subsurface anomaly which would be a human body, but also kind of a personal thing for me. I don’t want to see veterans not be recognized in a cemetery.”

Understandable. Shank’s grandfather was a veteran of World War II and his father a Vietnam-era veteran.

“And all of their uncles, relatives, cousins—it seemed like everybody was in the military,” Shank said. “It was just very much a part of my growing up.”

So when Shank graduated from Graham High School in the tiny western Ohio village of St. Paris, he joined the Army, where he spent the next four years that included a tour in Afghanistan. 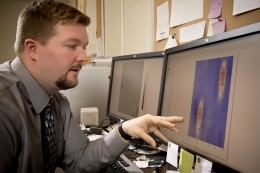 Shank became involved in the geography program, lured by the mapping and satellite imaging aspects that reminded him of his duties in Afghanistan.

As part of the Army’s 82nd Airborne Division field artillery, Shank jumped out of planes along with howitzers. Once on the ground, his unit would launch shells at enemy targets to protect infantry and patrol units.

Shank became involved in the geography program, lured by the mapping and satellite imaging aspects that reminded him of his duties in Afghanistan. For his Master’s degree, he enrolled in the College of Science and Mathematics Department of Earth & Environmental Sciences’ geology program and began taking geophysics courses.

As he was looking for a thesis topic, he ran into a member of the Daughters of the American Revolution, descendants of people who were involved in U.S. independence and who promote historic preservation and patriotism. She told Shank that her group had been trying to plant flags on the graves of military veterans in a Xenia cemetery, but that many of the gravestones were missing. For Shank, it was the perfect thesis project.

The graves, including those of the veterans, were documented in the 1950s by a group of volunteers. So the names, backgrounds and burial lineup are known, but exact locations are not because many of the gravestones—probably more than 100—are buried or have disappeared.

So Shank set up a rectangular grid and began using three different techniques to try to find the graves.

He first used a cesium magnetometer that measures the magnetic field and detects disturbances in the soil. Then he employed electromagnetics by using a device with coils that looks for anomalies by sending a current into the ground. Finally, Shank tried ground penetrating radar to look for reflections in the subsurface that might reveal an object.

As it turned out, the magnetometer has yielded the most promising information.

“The data we collected from the magnetometer was probably the best, and I was the least excited about that going into it,” Shank said. “Initially it looks like I’ve got some decent data. I think we can be pretty confident in this.”

Shank has also been selected to give an oral presentation of his thesis work at this year’s national conference of the American Institute of Professional Geologists (AIPG) in Denver, Colo.

If the gravestones can be found and recovered, they will be propped up over the appropriate graves. That will enable them to be properly honored, and their history will not have been lost.

And Shank will likely have his master’s degree.