Sarah-Ann Blount will never forget the day she shot down her first spaceship.

“My first big programming project was to make a simple video game,” Blount said. “You would just press the space bar to shoot down the spaceship. It may not sound like a big deal, but when you write code for hours and hours and finally get it right, it’s a great feeling.” 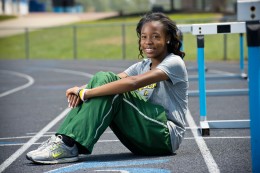 An All-American in the long jump and 100-meter hurdles, Sarah-Ann Blount also competes in the heptahlon for the Raiders.

The junior from Dayton is one of the more visible success stories of Wright State’s STEPP program, which encourages motivated science students in the Dayton and Springfield public schools. Blount has also experienced success in intercollegiate athletics, earning All-America status in the long jump and 100-meter hurdles.

Blount did not begin competing in track until her sophomore year in high school, devoting most of her non-school time to basketball, baseball, cheerleading and dance. Her road to academic success began much earlier, in seventh grade, when she first enrolled in the STEPP program.

Wright State’s Science, Technology and Engineering Preparatory Program is offered by the College of Engineering and Computer Science. Students spend four weeks each summer, six hours per day, in classes taught by university professors. Students who complete four summers of STEPP training are eligible for a four-year full-tuition scholarship at Wright State. 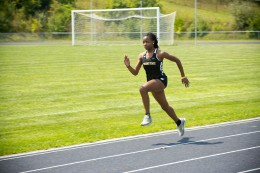 At the Junior Olympic National Championships in Greensboro, N.C. Blount earned All-America status in both the long jump and 100 hurdles by finishing seventh and eighth respectively.

“The admissions process was hard, but when you think about getting four years of college paid for, it wasn’t really all that difficult,” Blount said. “The classes were really helpful. I learned a lot. It’s also a good networking experience.”

Blount’s shining moment on the track occurred in July at the Junior Olympic National Championships in Greensboro, N.C. She earned All-America status in both the long jump and 100 hurdles by finishing seventh and eighth respectively.

Her Junior Olympics semifinal time of 14.25 seconds in the hurdles was a career best—and a rather sizable improvement over the 16.30 seconds Blount recorded in the same event before she arrived at Wright State.

Part of that improvement can be attributed to simple physical maturity. Blount was promoted early from first grade, leaving her a year younger than most of her classmates—and her competitors.

“Now that I’m a junior, I finally get to start running against people my age,” Blount said with a laugh. “This is the first year I won’t be the youngest person on the team.”

Blount has also found a unique niche in the heptathlon, where she had the second-highest point total on the team last year. The heptathlon combines seven events—100 hurdles, high jump, shot put, 200 dash, long jump, javelin and 800 run.

“I had to learn all of those events except the long jump and hurdles,” Blount said. “I struggled with that a lot, especially the first year.  I had to learn how to practice different events on different days and spend more time on the events where I’m weakest, the high jump and the 800.”

Blount plans to put her skills to work for the Air Force after completing her degree. When that graduation day comes, she will leave with good memories from her time at Wright State.

“I love how Wright State is like a big community; everybody supports each other,” Blount said.