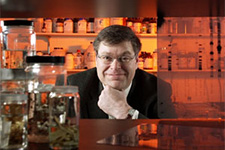 One of biological sciences professor Dan Krane's popular presentations is "The Science (and Pseudoscience) of DNA Profiling," which shows audiences why DNA profiling is the gold standard of forensic science.

Mystery writers and detective novelists from around the nation now have a better grasp of DNA testing thanks to Dan Krane, a Wright State University biology professor and one of the world’s foremost DNA experts.

Krane, Ph.D., was the keynote speaker at this year’s annual Writers Police Academy in Jamestown, N.C., just outside of Greensboro. Mystery writers flock to the academy to come up with story plots that are accurate and authentic.

The academy not only features talks from experts—Marcia Clark, head prosecutor in the O.J. Simpson murder case, was last year’s keynote speaker—but it also offers the writers an up-close view of law enforcement techniques, practices and inside knowledge.

“It’s a very intensive experience,” Krane said. “Law enforcement treats it like one of their training sessions. The writers will go on stakeouts, break down doors and all sorts of things.”

Many of the writers have landed books on The New York Times bestseller list. April Henry, whose co-written thriller Face of Betrayal was on the list for four weeks, has attended the academy several times.

“In this one place I can talk to a firearms expert, experience realistic firearms scenarios, hear from a woman who works as an undercover prostitute, learn from a scientist who has had top-secret clearance for her work with bioweapons, hear from a recently retired Secret Service agent, learn handcuffing techniques and practice them, practice clearing a building, talk to a sniper. The list goes on and on,” Henry said. “And thanks to Dan, I now have a watertight plot for the book I’m writing.”

Krane graduated with a bachelor’s degree in biology and chemistry from John Carroll University in 1985 and obtained a Ph.D. in molecular biology from Penn State in 1990. He did post-doctoral research at Washington University and Harvard before accepting a faculty appointment at Wright State in 1993.

Krane has testified as an expert witness in more than 100 criminal trials in which DNA evidence was presented and was a consultant in the O.J. Simpson trial.

“Less than 1 percent of all cases involving DNA evidence are critically reviewed,” Krane said. “Anything we can do to nudge that needle up a little bit is something I’m after.”

Krane said DNA profiling is the gold standard of forensic science, but a standard that can be improved.

“When people are convicted on the basis of DNA testing, I want them to be convicted for the right reasons,” he said. “I want it to be based on solid science. That’s what my research is about.”

Krane is hoping the mystery writers can do for DNA testing what science fiction writers did for astrophysicists, giving them ideas that enriched space exploration.

“I want these writers to illuminate deficiencies with the general public’s understanding of DNA testing,” he said. “I love that they can write a nice story so readers will come away with a better understanding of how DNA testing works so that people who try to oversell the value of test results can’t pull the wool over their eyes.”