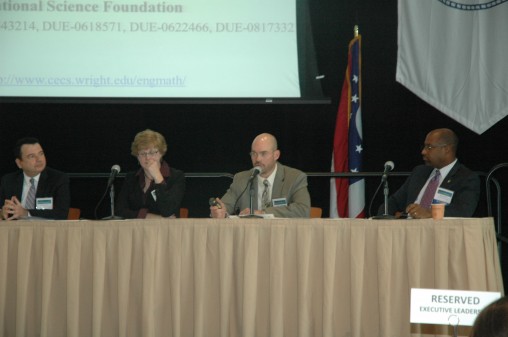 An innovative Wright State program that has increased the graduation rate of engineering students by restructuring the way math courses are taught was detailed to a spellbound audience of trustees, presidents, provosts and other university officials from around the state.

Nathan Klingbeil, Ph.D., dean of the Wright State College of Engineering and Computer Science, took part in a panel discussion Oct. 21 at the 2013 Ohio Board of Regents Trustees Conference in Columbus.

“It’s an engineering solution to an education problem,” Klingbeil told the gathering. “We have completely wiped out the entire effect of incoming math preparation on whether or not you can be an engineer.”

Klingbeil has helped redesign Wright State’s engineering mathematics curriculum to increase retention and graduation, a model that is spreading across the country.

About 220 university trustees, presidents, provosts and others crowded into a conference room at Columbus State Community College’s Center for Workforce Development to hear the panel.

Following the panel discussion, Gov. John Kasich delivered remarks on higher education and then announced that Ohio State University President Emeritus E. Gordon Gee will lead an effort in coming up with recommendations for how the state’s colleges can enhance quality and cut costs at the same time.

During the panel discussion, Klingbeil explained that Wright State decided back in 2004 that freshman calculus was no longer going to be the litmus test for who could become an engineer.

So a freshman engineering course was developed that taught students only the math they would need to progress in their engineering classes through their sophomore year. While all the traditional calculus courses are still required, the back-to-back sequencing that so often derails students was replaced with a more just-in-time, flexible structure.

“We present to them the big picture–the entire forest,” Klingbeil said. “They go back to the math department later on and they get the trees. In the meantime, they make meaningful progress towards a degree.”

Klingbeil said “uncorking” the calculus bottleneck can enable universities to double the number of students who get their degrees. He said students who take the first-year engineering math class earn Wright State degrees at a rate of 70 percent.

“It’s a wonderful example of innovation,” Church said. “They challenge traditional assumptions about how engineering curricula are structured so that they can think differently and restructure the program in response to the need.”