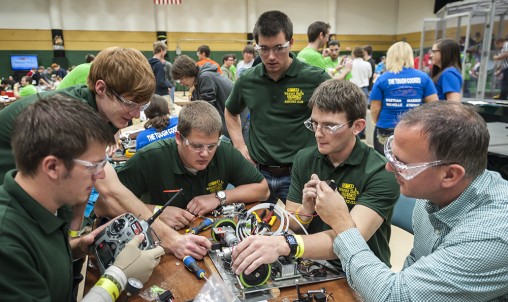 Members of the Wright State Lake Campus Robotics Club working on their robot during the competition.

Teams of high school and college students battled one another with remote-controlled robots during the Xtreme BOTS Competition Fall 2013 in the Wright State Nutter Center.

More than 200 students from more than 40 high school and college teams from Ohio participated in the Nov. 2 event.

Competing in a 10-sided arena in the McLin Gym, teams battled head to head in three-minute matches, trying to cause maximum damage to their competitors’ robot.

Each team had several means to try to disable their competitors’ bot: ramming, flipping and using their specially built weapon. The most crushing collisions elicited cheers and gasps from the crowd and competitors.

Though each robot could not be more than 15 pounds, they came in all kinds of shapes, from wedges to rectangular blocks to squat cylinders.

Whenever both robots survived their bout, a panel of judges voted on the winner based on aggression, control and damage caused.

Each team was responsible for designing and building its robot. Around the gym, teams furiously made improvements to their bots, soldering parts, drilling holes and swapping out components, as they tried to get the best performance out of their bot.

Wright State was represented by the Lake Campus Robotics Club and Bastian Schoettner and Stephan Geber, juniors at the University of Applied Sciences in Jena, Germany, who are studying computer engineering and electrical engineering at Wright State during the Fall Semester.

Schoettner and Geber said they would not have been bale to compete in an event like Xtreme Bots in Germany. They received assistance and support from several faculty members and departments within the College of Engineering and Computer Science.

The competition was organized by Ohio Robotics Inc., a Dayton-based nonprofit organization whose mission is to help increase the number of manufacturing workers in the Miami Valley. The organization seeks to develop this pipeline by encouraging young people from middle school through college to study science, technology, engineering and math.

Members of the Wright State Lake Campus Robotics Club working on their robot during the competition.

More than 200 students from more than 40 high school and college teams participated in the Xtreme BOTS Competition.