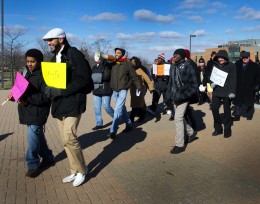 Wright State’s MLK holiday week activities will include a march on Jan. 23 on campus.

A campus march, a forum on building community and the showing of a documentary film about a letter from Martin Luther King Jr. that became a key text for the civil rights movement of the 1960s will highlight the 2014 MLK holiday week at Wright State University.

The campus events, sponsored by the Bolinga Black Cultural Resources Center, are scheduled for Jan. 21, 22 and 23.

In addition, on Jan. 20 an estimated  40 Wright State students will take part as a group in the annual citywide MLK march and rally in Dayton. They will join the march following breakfast at Sinclair Community College with Sinclair students.

“It’s going to be an amazing week,” said Dana Patterson, Ph.D., director/lecturer of the Bolinga Center.

King, a clergyman, activist and prominent leader of the African-American Civil Rights Movement, received the Nobel Peace Prize for his efforts to end racial discrimination. He was assassinated in 1968. In 1986, Martin Luther King Jr. Day was established as a U.S. federal holiday.

A forum titled Building the Beloved Community in the atrium of Wright State’s Millett Hall is scheduled for Tuesday, Jan. 21, from 11 a.m. to 1 p.m.

“The main concept of the forum is to talk about the principles that Dr. King left, and he really left an instruction manual in a lot of his writings and his texts,” said Patterson, who will moderate the forum. “We’re going to be looking at some of his writings and applying that to the community.”

Co-organizer Erin Evans, a sophomore from Springfield majoring in sociology, said she hopes the forum will include discussions on how students can set good examples of which King would be proud with their appearance and behavior.

On Wednesday, Jan. 22, there will be three showings of the documentary film Letter from Birmingham Jail. The film, which was produced at The Ohio State University, features the reading of an open letter from King written on April 16, 1963, in which he defended nonviolent resistance to racism, arguing that people have a moral responsibility to break unjust laws.

The film will be shown at 10 a.m., noon and 2 p.m. in the Student Union’s Apollo Room and include attendance by the documentary’s director.

On Thursday, Jan. 23, students, faculty and staff will take part in the annual campus march, starting at 11:45 a.m. in the atrium of Millett Hall and marching to the Student Union Endeavor Room for a rally and discussion session.

Patterson said the session will focus on how to strengthen campus unity and community.

“The students really use that as an opportunity to talk about what they would like to see and what their ideal community would look like here on campus,” she said.