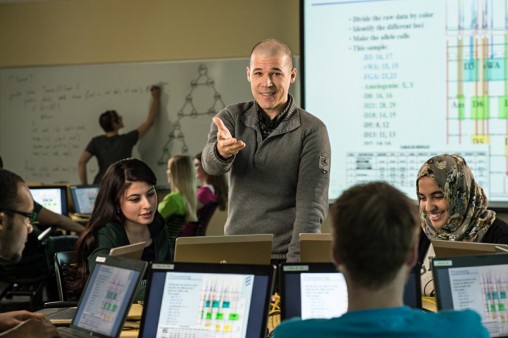 There is no front or back to this classroom. And the seats are not in rows.

Instead, the room is honeycombed with large circular desks outfitted with computer stations. Fist-gripping the walls are whiteboards and video screens. And the action is fast and furious.

The instructor projects a problem on the screens, and teams of students huddle at the desks—discussing, arguing, analyzing, tearing into it with an intensity not normally seen in conventional passive-learning classrooms.Welcome to the Russ Engineering Center, where for the past 18 months computer science students have been swimming in a Student Centered Active Learning Environment, or SCALE-UP.

“It’s an environment that enables active learning to take place on a larger scale and in a more effective manner,” said Travis Doom, Ph.D., associate professor of computer science and engineering. “And when students have their Aha! moments, they can share in exactly the right way with the other students. It’s more effective.”

“Our anecdotal preliminary assessments show that not only do the students enjoy the classroom more, but it appears that they actually retain the technical knowledge with higher fidelity,” Doom said. “It’s pretty exciting.”

Historically, the conventional method of teaching stemmed from the need for a professor to disseminate information to students face to face because books were expensive. Then textbooks were developed to supplement teaching, but learning was still done in a passive way.

With the advent of the Internet, online publications and YouTube, students have better access to current information that prepares them for class discussion. That frees up class time for interaction with the professor and leads to more active learning.

“The future is in active learning; there is no doubt about it,” Doom said.

The idea for the SCALE-UP classes at Wright State sprang from the University of North Carolina physics department, which was using hands-on, lab-like exercises in classroom lectures. It seemed like a natural way to teach engineering.

Doom said many students are initially uncomfortable in the SCALE-UP environment because it is not what they are accustomed to. Once they get used to it, he said, the vast majority love it.

The teaching method has raised up the bottom third of the class—those students who would get lost in lecture, be afraid to ask questions of the instructor and fall behind. These students are now able to pose questions to their teammates and gain an understanding of the material, enabling the entire team to move forward to the next idea. There is peer pressure to learn.

“But what surprised me is that this method has the most impact on the upper third of the class because they become teachers,” Doom said. “Not only do they learn it, but as they learn it they have to explain it to someone else, which just crystallizes the infrastructure in their mind.”

Doom said he hopes this method not only gives students a stronger set of technical skills, but also soft skills so valued by employers such as communication and social skills as well as teamwork and leadership ability.

And he said there is anecdotal evidence that students with autism spectrum disabilities are well served by SCALE-UP.

“Their technical prowess makes them leaders oftentimes, and they are not used to that,” he said.

Currently, SCALE-UP is being used in every computer science and engineering class students take in their first two years. It is also being experimented with in some history, anthropology and other non-engineering courses.

In addition, all of the classrooms in the new Student Success Center and Classroom Building, which is scheduled to open in the spring of 2015, are being designed as active-learning rooms.

It would have been hard to predict that Doom would be a pioneer of cutting-edge teaching techniques in higher education. He grew up in Detroit in a family of autoworkers, was the product of Detroit public schools and became the first member of his family to attend college.

He became interested in computer engineering as an undergrad at Bowling Green State University.

“I recognized that mathematics was the tool that you used to solve all of the important problems,” he said. “And to use mathematics on problems of a large scale, you had to use computers to do it.”

Doom obtained his master’s and Ph.D. in computer science and engineering from Michigan State University and in 1998 joined the faculty at Wright State despite receiving offers from Intel Corp., Argonne National Laboratory and two other universities.

“I came to Wright State primarily because this institution is young and agile,” he said. “If you want to teach things in SCALE-UP, for example, the administration will let you try it out. That was just so attractive to me.”

Doom preaches the gospel of computer science as a career.

“Building computational devices that can interact with each other and make people’s lives more convenient, safer, more enjoyable—that is the new wave of consumer technology,” he said. “People who can enable that—who can envision cool ideas—they are going to drive society’s direction and changes and make a nice living for themselves.”